Project Row Houses lines up along Holman Street in Houston's predominantly black Third Ward like pointed silver and white helmets belonging to some army of giants. The eight shotgun houses along this block are galleries and studios for new artists.

In a city known for its world-class art museums, this art has a different kind of freshness. The art hanging in the sunny rooms is a mix of mediums. Some of the abstract panels were over my head, but it was all interesting. 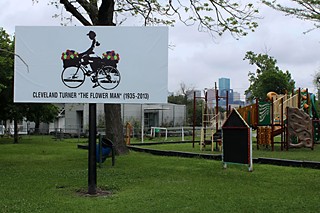 Built in the Thirties, the former rental houses were rescued from demolition in the Nineties by artist Rick Lowe. Ultimately, 22 houses in one of the oldest African-American neighborhoods in Houston were renovated with a combination of volunteers and grants from foundations.

Since 1994, the project has grown in scope to become a cultural as well as artistic influence in the community. Some of the PRH houses are used to give young mothers a year of free housing to allow them time to finish their education. The organization also sponsors a neighborhood food co-op and entrepreneurship workshops. In 1999, the group was given the historic two-story Eldorado Ballroom where young musicians played before they became legends. It is now a community center.

Project Row Houses is at 2521 Holman, a just southeast of downtown Houston. There are often docents or artists available during public viewings Wednesday through Sunday from noon to 5pm. For info: 713/526-7662 or www.projectrowhouses.org.