The Good Eye: The Pulse 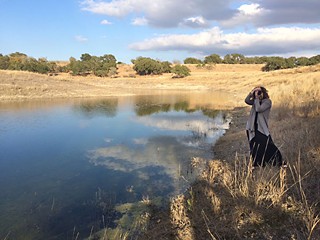 One last look from "The Good Eye" (Courtesy of Curtis Luciani)

An actress I interviewed a few months ago happened to mention the challenges of playing a dead girl lying in a puddle at the bottom of a Dumpster. Almost every young actress gets a shot at playing a dead girl; the industry is built on them. In preparation for the role, she had practiced lying absolutely still, subjecting her every twitch to ruthless self-discipline. But there was one aspect of her performance that, try as she might, she couldn't control during the shoot: her exceptionally strong pulse. It troubled the water, sending out tiny, rhythmic ripples in concentric circles timed to the beating of her heart.

Dead to the story, her body insisted on being alive.

Having wrapped up my six-part series on women's roles in film last week, I confess I'm still struggling to articulate why this subject feels so urgent to me. Behind all the words I've written about representation in film, I can still hear that throbbing pulse, see the water quaking all around it, a barely visible reminder that in almost all of the media we watch, bodies are at stake.

Film is the only medium that commits to permanent memory the look and sound of real bodies in motion. This indexical relationship to real bodies, even when depicting pure fantasy, makes film a useful figure for what is human about all art.

The dead girl in the puddle is a real, living person. So is the maid who answers the door, the prostitute glimpsed servicing a john in a dark alley. In the moment when these actresses, these very real women, adopt the attitude of dead girls and maids and prostitutes, they confront a reality darker than most of us will face in our lifetime: They come face-to-face with how the filmmaker sees them, how society has seen and will continue to see them. Through the camera lens, a young woman with her whole life ahead of her looks like a dead, raped girl. A Latina woman who owns her own business looks like a maid. A black woman who has children in college looks like a prostitute.

Actors accept these roles because their own particular art requires seeing themselves, their bodies, from the outside. Moreover, conventional narrative storytelling demands a hierarchy of roles: leads, supporting roles, minor roles, bit parts, featured extras, extras. The problem is how this hierarchy of roles maps onto a hierarchy of bodies in the world – sometimes in ways that are visible to viewers, like amount of screen time, and sometimes in ways only those in the industry will ever see, in unnamed roles and character descriptions. It's one thing to use your body as an art object. It's another to face one's value in the aesthetic marketplace, confirmed by the fact that most people would prefer your body be erased from the screen altogether, or, if present, lying dead in a puddle.

Of course, roles depicting victimhood and subservience will be around as long as we enjoy watching stories about murder and the rising price of real estate – which I emphatically do. But the violence I'm talking about isn't a direct function of violence in the narrative; consider the smiling, childlike Vietnamese character on Tina Fey's otherwise brilliant Netflix series Unbreakable Kimmy Schmidt. A halfhearted satire of a hoary old John Hughes character from 30 years back – not exactly the freshest object for satire – the role is played by Ki Hong Lee, a handsome and funny Korean-American actor who, in a less racist world, might be considered for an accent-free role as a leading man.

Unbreakable Kimmy Schmidt hits close to home for me, evidence that even the smartest white women are not inherently better than white men at writing non-white characters. Perhaps the only character we all instinctively know how to write is a straight white man, for the simple reason that we've grown up seeing the world on film through his eyes. In high school, my best friend and I identified with the neurotic, aimless young men of Noah Baumbach's Kicking and Screaming, not their girlfriends; we scribbled lines of their dialogue on our shoes, called each other Grover and Otis, and tried to dress like college boys.

That's because film doesn't just preserve the afterimage of bodies in space, delivering to viewers the distant, long-stilled vibrations of dead girls who are now really dead, black actresses who played maids in the first 50 years of American film, Native Americans who played savages in John Ford movies. Film can enter the body of the viewer. It can change our body chemistry, surprise us with sudden tears or sexual arousal or nausea or a million more subtle responses. Film can sculpt our bodies, just as it sculpts the actors' bodies on screen.

Despite our seeming hunger for a never-ending stream of content and images, art is excruciatingly hard to make in our society. Making something out of nothing and calling it art is a ridiculously vulnerable thing to do, and anyone who makes a film, writes a novel, records music, paints, does so at great personal cost. In the face of that courage, to call someone out for, say, forgetting to remember what real women are like, or forgetting to care whether people of color will watch this and how it will register in their bodies, can look, to a lot of people who just want to enjoy something, like mean-spirited nitpicking.

But art is what we make on the off-chance that it will survive us. Our bodies die, while our bodies of work have the potential to live on, sculpting other people's experiences, influencing not just the way they see themselves and the bodies around them, but the way they shape that experience into new bodies of work that might, in turn, shape further generations. If we see our art as anything more than a disposable source of pleasure to be thrown in a Dumpster at the end of a day, we must reckon with the bodies in our own work. We must listen for the pulse.

As "The Good Eye," I've had the pleasure of writing about style, culture, and feminism every week since December 2013. Listening to the pulse in my own writing, I feel the time has come for me to move on to other projects. Thanks to my readers for their patient attendance to my weekly ravings, and to the editors at the Chronicle for giving a style column to a woman who hasn't shaved her legs since 2006. And never forget: If you can feel sexy in a caftan, you win. 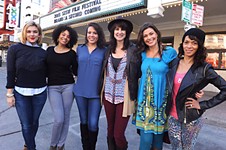 The Good Eye: Crossing the (180-Degree) Line
Austin actresses go behind the camera