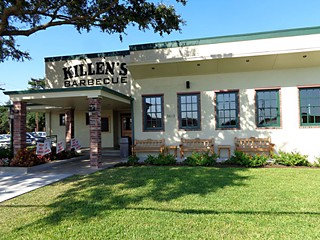 Killen's Texas Barbecue in Pearland reached its first birthday at the end of February. In that year, Chef Ronnie Killen may not have perfected barbecue, but he took smoked meats to a new plateau.

The problem with great Texas barbecue is that everyone talks about it. If we would just stop bragging about the great places, then maybe there wouldn't be a two-hour wait for a slice of heavenly brisket. Killen's is the kind of place you only tell your best friends about. But if your friends know anything about Texas barbecue, they already know about Killen's.

Killen's nationally recognized steak house is a few blocks away.

On an early Thursday afternoon, I waltzed right up to the cafeteria-style serving counter in the old Pearland school cafeteria building. Out front are picnic tables shaded by a towering oak tree and a dispenser of numbered paper tabs. It had been a busy lunch run, but the long line had disappeared and the beef ribs were almost sold out.

There is an argument over whether barbecued brisket should be lean or moist. Killen's brisket is a great example of moist. On the long drive home I couldn't stop pulling strips of the juicy sliced meat from the grease-soaked red butcher paper bundle. That's the highest praise I can give it.