Taking a good look at "geek girl" and other gender tropes 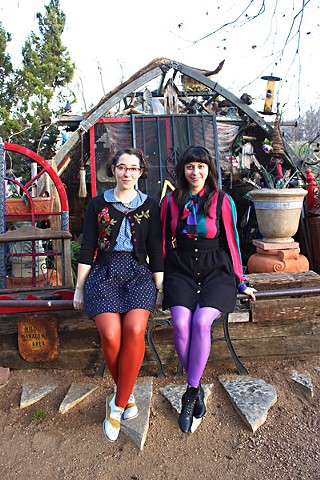 Kaci Beeler and Kelli Bland, quirking it up (Photo by Amy Gentry)

"'Pretty. Fit. Girl-next-door type.'" Local actor Kaci Beeler (who's also, full disclosure, my friend and occasional creative collaborator) is imitating character breakdowns, the postings that describe what a director is looking for in a particular role. "As an actor, you look at that and just ... who walks around thinking, 'I'm so beautiful and fit, this is going to be perfect for me'?"

Unlike the actors I interviewed for "Tales From the Beauty Box," Feb. 20, Beeler doesn't often get called in to audition for Hot Chick #2. Instead, she gets calls for nerds, artists, and, despite her age, college students – at 27, she played a student reporter interviewing Darrell Royal in My All American. "For me, it's been 'college-age woman.' Or 'quirky person.'"

Welcome to the "quirky box," where a gaggle of petite brunettes with thick-framed glasses and good comic timing compete for roles like Geek Girl, Weird Office Assistant, and, on a good day, Crazy Best Friend. The first thing to observe about the quirky box is that its denizens still adhere to conventional beauty standards. They still have to stay slim, straighten and whiten their teeth, keep their skin glowy and their hair shiny. They still have to be attractive; they just don't look like models.

That crucial difference is something they are never allowed to forget. Beeler once auditioned for a beer commercial in which her character was supposed to open a cold case in the grocery store to find a wild, raging party inside – complete with obligatory babes. Dressed for her part in ordinary clothes, she found herself surrounded by a forest of high heels and miniskirts at the audition. "The role was 'Beautiful Ladies.' The casting director's assistant kept coming out and being like, 'Do we have any more beautiful ladies? Do we have any more beautiful ladies?'" She laughs. "And I'm just sitting there going, 'Nope! Not me.'"

Sure, that's a beer commercial. But Beeler says even respected screenwriters and directors, whom she declines to name on-record, frequently write assessments of their female characters' hotness right into the script. "You're reading the script and it'll say, 'Cute co-ed walks up.' And you just wonder about your worth in that moment, as this sort of prop. You're like, 'Well, I guess I'm okay with being a prop.' So you go in to audition, and you're looking at all these other props, trying to do their best with their hair and their outfits and their makeup. Think about doing that multiple times a week ... your livelihood is sizing yourself up constantly, and the descriptions of what you're supposed to be are always on the side of physical beauty."

Beeler says male actors also deal with this pressure. But Kelli Bland, another quirky-boxer who often bumps into Beeler at auditions, puts men's experience in a context that is particularly relevant for Austin: "Big-time TV and movies, the majority of the men are going to be extremely good-looking. But for indie films, what is deemed attractive is more nuanced" – for men, she means. The same nuance doesn't extend to women. "In indie films the majority of the men are pretty average-looking. But no matter what, in the indie films, the women are always good-looking." (N.B. Zoe Graham's cheekbones.)

Beeler and Bland both said they relish the freedom to be funny and awkward that comes with the quirky box. Bland points out, though, that not only does being labeled "quirky" make opportunities to play leads almost nonexistent, but the label itself can be used to diminish women by rendering them cute and harmless, or reducing what might otherwise be seen as originality to a manic-pixie stereotype.

Bland, who has recently tried her own hand at screenwriting, blames bad writing and derivative plots. "The indie one I hate, that I wish would die: just-graduated-from-college-to-mid-30s guy, doesn't know what to do with his life and takes it out on everyone around him – particularly one girl, who will or will not stay with him, depending on how dumb the movie writes her."

Since every successful film breeds scads of imitators, these one-dimensional stereotypes are self-perpetuating, Bland explains. "The majority of the scripts are still written by men – and, off the record, totally clueless men, men who don't know anything about women because all they've been doing is watching movies!" She laughs, as if surprised by her own anger, then reverses herself: "You can put that on the record. It's an inflammatory thing to say, but it's true."

It's an instructive moment, one in which you can see Bland's optimism duking it out with her frustration. She says more and more men are genuinely interested in addressing these problems – but she won't name them, for fear of offending the others. The truth is, in an indie film scene like Austin's, everyone's an outsider, everyone's an underdog. In a community that feels so much friendlier and more forgiving than L.A. or New York, it's in everyone's best interest to maintain a sense of solidarity. Besides, everyone takes jobs that are less than ideal at first.

Still, there are trade-offs to looking back on a resume loaded with toxic tropes. In one comedy, Bland plays "Party Girl," a nameless drunk who gets vomited on by one of the male leads. It's her comeuppance, presumably, for rejecting another male lead; but also, in the tradition of Leslie Mann's "slut" character in the 40-Year-Old Virgin and Carla Gallo's "Period Blood Girl" in Superbad, the punishment is also implicitly for crossing a sacred line: from quirky to unpredictable, cute to sexually threatening. As a viewer, I find such moments almost viscerally alienating. I can't imagine acting one out.

But Bland, for her part, is happy enough in the quirky box. She just wishes it had a little more elbow room. "I want a big ol' box, is what I want. Guys have a big ol' box."

Next week, join "The Good Eye" for a tour of the tiniest box of all: the minority box.