The Good Eye: Tales From the Beauty Box 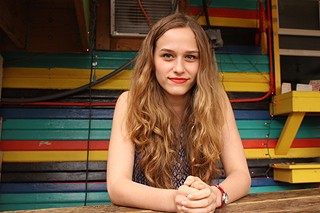 In my last column ("Boyhood, Girlhood, Personhood," Feb. 6), I called a woman a "walking pair of cheekbones."

The woman, Sheena in Richard Linklater's Boyhood, was imaginary. The Austin native who played her, Zoe Graham ("Golden Girl," July 25, 2014), isn't. Graham is more than her impressive zygomatic arches; she's an artist, a musician, and a self-described feminist. Weeks before my Boyhood column, she wrote a long, thoughtful Facebook post defending the film's depiction of gender, but also expressing her personal frustration over the lack of nuanced roles for actresses. "Women," she wrote, "are so desperate to have movies that prominently feature multi-dimensional female roles that they can't just watch a movie."

As a critic, I don't want to "just watch a movie"; I want to watch a movie that doesn't reduce three-dimensional people to gorgeous props. It was crass of me to conflate Graham's character with her cheekbones, but it wasn't inaccurate; that's how most female character descriptions and breakdowns are written in the industry, a fact fed-up actresses regularly satirize on Tumblrs like Lady Parts and Instagrams like Actual Actor Ads. The difference between Zoe Graham and me (besides the cheekbone thing, I mean) is that I can make a living sticking to my principles; actresses, for the most part, can't.

Film is a visual medium, and all actors tend to be cast according to physical type. For women, however, the range of available types is narrower, the flexibility to move between them nonexistent, and the expiration dates for most non-negotiable. Actress Kelli Bland (Austin High, The Man From Orlando) put it this way: "You have your box, and you have to be your box. You're not allowed to be a complicated feminist when you go into an audition room."

You might expect a place like Austin, dominated by independent filmmaking, to be friendlier – or at least weirder. But with most films here still made by men, female leads for the biggest films often cast out of L.A., and a smaller pool of roles to begin with, the landscape for Austin actresses can look bleak. The women I talked to for this series have had these conversations countless times, over beers and behind closed doors, sometimes with men, but usually just with one another. In a competitive industry, some fear being perceived as "difficult." Others are just sick of thinking about it.

The most constricting box of all is the one Graham's in – call it the beauty box, full of slim, blond, white women in their 20s. Casting options in the beauty box include Dead Girl on CSI, Hot Drunk Girl #2, and Bitchy Sorority Chick Who Snubs Hero. If she's lucky, she might inspire a male lead to artistic achievements, self-actualization, or, at the very least, fisticuffs.

Graham responded to my questions over email while catching up on her homework at Maryland Institute College of Art. "I've turned down many roles (based in Texas and California) simply because the female character I'm supposed to portray is not a complete person," she wrote. "This happens way more often in horror movies than it does anywhere else. The character breakdowns are disgusting 80% of the time. 'SASHA: A pair of freckled boobs with a cross necklace between them... ' So I am literally trying out to be a pair of boobs?"

At least those boobs have a name. Jessie Tilton, a local actress of a similar type who had a small (but named) role in Boyhood, eventually made a decision not to try out for roles unless the character was named. "I can't even tell you how many 'Girl #1' or 'Drunk Girl #2' roles I've gone out for. At this point I think it's ... I've been acting for so long, it's an insult to me."

Tilton, who is 27, says she tries not to think about being in a box. "There was a window where that was all I went out for, the shallow, never-get-to-know-her girl that the dude's going after – those are the parts that are available for women. My agents are great, they send me the best of what they've got. Sometimes that's all they've got."

Then there's the "full or partial nudity" clause, an asterisk that decorates a hefty portion of roles for beauty-boxers. Tilton recalls auditioning for a Larry Clark (Kids) film that required nudity: "I walked into the room and he just kind of stared at me for a long time. And then he was like, 'Take your jacket off.'" She complied, and he circled her slowly several times while talking to himself – "Saying things like, 'She's pretty.'" This, I take it, is the "artistic" corner of the beauty box.

How do actresses cope? Tilton says improvisation – which she used to develop dialogue for her sarcastic waitress character in Boyhood – can add depth, humor, or realism to even a minor role, if the director is open to it. But with final control in the director's hands, improvisation is no substitute for a well-written character.

Graham and Tilton both said the only real solution was for women to start writing their own roles. Graham wrote, "If we allowed women to take control of the box-office narrative even a measly 25% of the time, we would have legions of robust parts available for women of all ages. And honestly, parts for men would probably be more realistic and interesting too."

Most actresses I spoke to echoed this, and it makes sense. Still, I can't help but think that having to write, direct, and star in your own film just to get a decent role is something like having to manufacture your own paint and canvas in order to become an artist, or open up your own country club in order to be a golf pro.

For her part, Tilton just wants Austin women to get their due. "There are so many insanely talented actresses here," she says. "There's something very earthy, grounded, and strong about Austin women."

Next week, "The Good Eye" takes a look inside the "Quirky Box."