The Good Eye: Secrets of Charm

Last week, the New York Metropolitan Transit Authority announced a public service campaign to discourage "man spreading" on public transportation. For those of you who have never lived in a city with public transit (thanks again, Austin voters!), this is the pernicious habit some men have of taking up more than their fair share of space by spreading their legs as far apart as possible. Following the announcement, women, long accustomed to being told to shut our legs, seized the opportunity to berate man-spreaders on social media; men claimed anatomical necessity; chaos ensued.

Searching for adjudication on this vital issue, I turned to my trusty copy of Charm, an advice manual written in 1928 by Margery Wilson and passed down through four generations of women in my family. Wilson comes down hard on sprawling: "We have seen sprawlers who were not ungraceful," she concedes with an extraordinary effort at fairness, but ultimately concludes that "as sprawling always denotes indifference, it is neither courteous nor gracious, does not show polite interest in those near, and is theretofore not kind in its inference."

Margery Wilson was a silent film actress and director. Though most often remembered for her role in D.W. Griffith's Intolerance, Wilson directed four motion pictures of her own, including an adaptation of the typographically rich self-help novel That Something by William W. Woodbridge. (Here is a typical bit of dialogue: 'Who are you?' I asked. "I am 'THAT SOMETHING,' came the reply." "But where are you?" "I am hidden in your soul.") After marrying a rancher who wanted her to retire from pictures, Wilson started her own self-help cottage industry via a series of radio broadcasts on charm, which she defined as "the technique of pleasing others while you maintain your own dignity and build your situation to your own liking."

A faded green book stamped with a golden art deco gazelle, Charm was a source of endless fascination to me in my youth. Its inner cover bears the following inscription: "With love to her 'charming' granddaughters, from Grandmother – June, 1985 – P.S. My mother gave this to me when I was a teenager!"

That inscription raised questions that haunt me to this day. First of all, why didn't my mother get Charm? Why did it skip a generation? Second, why did my sister and I get it so early, despite the postscript specifying adolescence as the appropriate time? In 1985, I was 7 and my sister 9. Did my mother present a hopeless case, and did my sister and I represent a new hope for whose advent my grandmother was desperately impatient? Or, as I suspected, was it the opposite – had my mother skimmed through the contents of Charm once at the age of 15, memorized everything between its covers, and handed it right back after acing the exam? Did my sister and I, in fact, receive it early because we needed all the extra time we could get?

I never asked. It was the nature of our family to be frank with expressions of love and vague on the rest of the human condition. At any rate, after 10 minutes of squabbling over which one of us would read Charm first (we were strictly forbidden to read any book at the same time, just as we were forbidden to claim the red glass two nights in a row, or quit any game, no matter how long and boring, before it was finished), my mother confiscated Charm and put it away, concluding drily that we were apparently "too young." When it reappeared on the shelf years later, I was disappointed to find it not even mildly pornographic.

At any rate, I'm old enough now, and I've been feeling guilty for veering far from my original mandate as a style columnist, so this week I re-read Charm from cover to cover in order to distill its best secrets for you, beloved readers:

1) "There is nothing so refreshing, restful and revitalizing as to brush the body all over briskly with a dry brush the first thing in the morning or before a pre-dinner bath." Every horse agrees!

2) "It is our place to bend and smooth, to refresh, to amuse, to rest, to inspire." Translation: Make the bed every morning; take a nap every afternoon.

3) "Don't ever be caught trying to be attractive or to look pretty. Better to be frankly ugly." Translation: Being a lady is extremely complicated. Hence all the naps.

4) "We should not return a compliment in kind at the time. Let the complimenter have his little triumph of giving." Note the Machiavellian thrill in the second sentence.

5) "Walk about the room on tiptoe making large circles with the arms." Try it at your next dinner party!

6) "Have you ever watched the breathing of people listening to something that was fascinating and absorbing to them? It is as though they were inhaling the perfume of a dewy rose in a June garden. A gentle, delicate, long breath that seems to reach well up into the forepart of the head, as though the wish were there to keep a current of that delightful atmosphere passing over the sensitive membranes that register its fragrance." Okay, I take it back about there not being anything remotely pornographic about this book.

7) "Stand right where you are, realize your own power, fill your heart with infinite love and kindness, then with an eye singled on your goal nothing can hinder you." Translation: Buy more of my books!

People did. Wilson's self-help career spanned 60 years, outlasting three marriages and ending with her death in 1986, a year after my grandmother gave me her book. For a woman who directed her own films and found a way to influence the world even after her first husband forced her to quit, charm must have felt like something of a superpower. It allowed her to get where she was going without ever seeming to take up too much space on the subway. 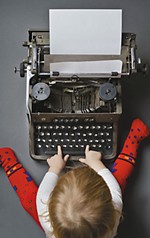 The Good Eye: On Productivity and Reproductivity
You could pick this column up and read it right now or ...

The Band
Up Early and Out Late With Kissinger