The Good Eye: There and Back Again 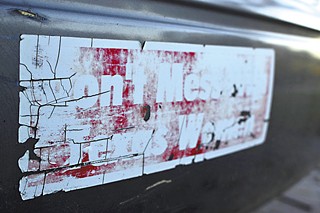 As you probably know, I've been watching a lot of horror movies lately, but nothing that prepared me for the massacre on Election Day. The Texas map currently looks like the lawnmower scene in Dead Alive, and my Facebook feed is littered with people announcing they're "done" with Texas.

I left Texas for the first time in 2001, but I'd been done with it for years. In high school, my best friend and I used to fantasize about living in adjacent writers' cabins in Vermont or a seaside cottage in Wales – some place where the leaves turned in autumn and the snow fell in winter, and we could wear thick woolen socks and read fat novels in front of a roaring fire. After graduation, I slapped a bumper sticker that read "Don't Mess With Texas Women" on my then-newish Toyota Camry and headed to the Pacific Northwest, where my friend was already living.

Portland had it all: coffee shops staffed by emo baristas, one of the biggest bookstores in the world, a video store with a shelf dedicated to Norma Shearer, and a lenient attitude toward frizzy hair. I sat in a rocking chair reading Joan Didion essays out loud while my friend knitted scarves in front of a fire. (Or rather, a light-up plastic log that plugged into an outlet under the fireplace-shaped heating vent. It didn't roar, but it whirred.) We were living the dream. We missed Texas like crazy. I was back within a year.

The next time I was done with Texas, it was in the middle of a long, messy breakup. I applied to graduate school in English literature because I had already missed MFA program deadlines and wanted to find a place in the world, quickly. The idea of a Ph.D. program helping anyone find anything quickly sounds hilarious to me now, but "life of the mind" was still a phrase I could use unironically at the time, and the University of Chicago seemed like a promising beginning.

I remember one magical night in Chicago when it seemed true. Leaving a party after midnight with three of my classmates – gabbing about books and films and the heady critical theory we were reading, the whole group suffused with a vague sense of mutual longing that hadn't yet settled into a definite pattern excluding all but the two most attractive of us – we found ourselves walking home through a fresh blanket of bluish-white snow. The plows hadn't come yet, and we trampled the white alleyways, hurling fresh armfuls of snow at each other, pushing each other down and rolling blissfully in drifts that glittered under the yellow street lamps. I don't even remember feeling cold.

Five years later, I trudged away from the subway stop through blackened snow in zero-degree weather for the hundredth time. I was accompanied by one of the fellows present on that first snowy night, who, in a strange fit of perversity, was now trying to convince me to date him, years after I'd lost interest. The whole thing made me tired. As we approached my poor Toyota Camry, no longer newish, dented and keyed after years of parking on the street, I saw that the faded "Don't Mess With Texas Women" had been embellished. Beneath the sticker, someone had duct-taped a piece of paper bearing a legend in Sharpie: "... They all have HERPES."

It was time to go home.

I'll always come back to Texas. Until the dry grass goes up in flames that devour us all in a fiery inferno, I'll come back. I've lived in places where they pay workers a living wage, I've lived in places where everyone's a Democrat and folks have never been south of the Mason-Dixon Line or west of the Mississippi. I've seen a lot of leaves turn and a lot of snow fall. But I've also seen the Capitol building turn as orange as UT on game day for a woman's right to determine her destiny. It's not a sight I'll ever forget.

After last week's bloodbath, it's pretty hard not to feel done with Texas once again. Texas women – the wealthy, white, married ones at least – are partially to blame. Despite cries of "false consciousness!" on the Twitter feed, I believe these women knew exactly what they were doing. These are women who look after their own. I was raised by them; I looked up to them. Believe me, they will always find a way to get their teenage daughters safe abortions. They will fly them across state lines. They will do it quietly, without letting the neighbors or the church group know. Unlike the women who voted overwhelmingly for Wendy – Latinas and black women and unmarried women and women making less than $50,000 a year – they consistently vote to protect their husbands' incomes, and thus they'll always be able to buy the rights not guaranteed by the law. As birth control gets harder for the poor to obtain and abortions even harder, those women who can't afford the hefty price tag for self-determination are, coincidentally, the same whose voting rights are being systematically gutted. Texas women are intended to disappear, like femmes couverts.

Make no mistake, they are going to keep messing with Texas women. But we're not going anywhere. 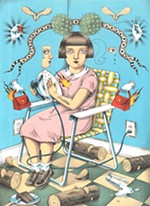