Blow-Up vs. The Eyes of Laura Mars: The female gaze of male gaze is way more compelling 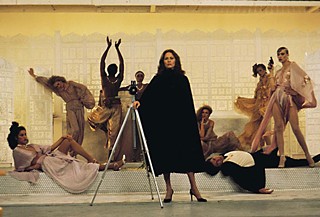 I first rented the 1966 Michelangelo Antonioni film Blow-Up at 23, a freshly dumped UT grad with time on her hands in between waitressing shifts. I ditched it around the time the photographer protagonist starts rolling around with two giggling teenagers in exchange for putting them in a fashion shoot. I might blame grad school for why I didn't finish it later – all the worst people I met there adored Blow-Up – but honestly, 13 years to finish a film is ridiculous. Even Antonioni's not that slow.

Blow-Up warns of the pleasures and perils of seeing the world through a lens. Like all films about photography, it's a cinemaphile's delight, because it appears to say something about directing. Thomas, played by David Hemmings, subsidizes his artsier work with glossy fashion photography. Though fabulously successful, he's bored with his life, and with the women who exist solely to bring him beer, make him coffee, massage his head, and throw their naked bodies at him, when they're not standing in front of his camera. Apparently, transforming the world into images has a down side: permanent ennui and the inability to see anything as real. Having made interchangeable objects of the women around him, Thomas finds himself unable to desire them sexually, even the teenage nymphomaniacs, and therefore profoundly alone. When the "blow-up" of the title reveals a murky crime in the background of one of his photographs, he's excited by a glimpse of something that seems real. But he never solves the mystery.

Instead, he gets schooled by a bunch of mimes. If someone had told me that Thomas' existential comeuppance is delivered by mimes in the last five minutes of the film, I'd have stuck it out. As a member of the elite junior high mime troupe Reimer's Mimers (our drama teacher was Ms. Reimer), I myself spent 1990 spreading our message of ghost-faced nihilism and distrust in objective reality to elementary-aged children in the greater Houston area. I can get with mimes. In retrospect, it's kind of a tragedy that it took me 13 years to get to that scene.

In the intervening years, my go-to film on the seductive danger of photography was Eyes of Laura Mars, a 1978 film often called an "American giallo" after the campy Italian slashers it resembles. Faye Dunaway plays Laura Mars, a world-famous fashion photographer who, for vaguely psychic reasons, begins seeing crimes as they happen through the eyes of the murderer committing them. Laura poses her models half-naked in crime-scene-like photos; now, she is forced to watch, helpless and blinded to her own surroundings, as the killer stabs those same models with pointy objects. In the most thrilling sequences, Laura becomes the object of her own gaze, forced to watch herself flee through the killer's eyes as he chases her. It's easy to understand what director Irvin Kershner claims, in the commentary track, is the film's Blow-Up-like message: Fashion objectifies women, sometimes violently, by making them into objects of a violent gaze.

Yet the sheer exuberance of the fashion in Eyes of Laura Mars belies that message. Costume designer Theoni V. Aldredge, whose designs for the otherwise mediocre Great Gatsby had won her an Oscar four years earlier (despite Ralph Lauren's attempts to take credit) and launched the Seventies-does-Twenties trend, was at the top of her powers. In Eyes of Laura Mars, Dunaway rocks a series of outfits that can only be called "dom-nun chic": all covered up in severe, quasi-Elizabethan neck-ruffles and wimple-like head-wraps, she flashes skin through dramatic, randomly placed slits. For a fashion shoot in Columbus Circle that features lingerie-clad models in fur coats fighting in front of burning, overturned cars (right?), Laura sports knee-high boots, a plaid camping blanket around her neck, and gaucho pants that flap open at her hips. It's that amazing.

I'm not dissing the costumes in Blow-Up. Thomas' blue gingham shirt is perfect, indicating that he's hip to the latest Italian menswear trend while also making David Hemmings look a bit like a giant baby. The mod, color-blocked shifts worn by the models in the photo shoots emphasize the way Thomas sees them: as large, brightly colored shapes to be manipulated. They don't have names – not even famous real-life model Veruschka, who plays herself. He orders them around by their outfits: "Hey, Stripes!"

Eyes of Laura Mars also features real-life Seventies models, notably Darlanne Fluegel and Lisa Taylor, in supporting roles as Laura's model-muses. But here, they are portrayed as central to Laura's work, so much so that her agent (René Auberjonois) worries she's making them too expensive. (Laura just laughs and says, "We'll work something out.") The models get names, lines, hints of backstory. And it's not just the models; in one scene Laura moves through the makeup trailer before a shoot, touching and hugging and asking after everyone as she gives last-minute directions to the women and gay men who hover around the models with hairbrushes and lipliners. She's clearly the boss, but they aren't objects to be converted into cold, hard cash; they're her friends, her family, her co-workers. Her collaborators, even.

I hope I will cause no offense when I say that being a film autodidact is complicated, for a lady. For the first hundred years, there were next to no female directors; at the close of the classic Hollywood era, actresses were no longer seen as bankable leads, and women's perspectives became hard to find indeed. Seeing the world through men's eyes again and again is fatiguing, occasionally violent, and even critiques like Blow-Up and 1960's Peeping Tom are shot from the man's point of view. You can miss out on some great stuff from sheer exhaustion.

Kershner is a competent director, but hardly an Antonioni; you'll never see Eyes of Laura Mars on a director's wall. If the film bears the mark of any auteur, it's Aldredge, or the morbid, icy Dunaway, or Auberjonois, who wrings pathos out of a murder-in-drag sequence, or Fluegel, or Taylor, or even Barbra Streisand, who sang the devastating theme song, "Prisoner." An auteurism of women and gay men.