The Good Eye: A Woman Possessed

Was she wrong to go all Isabelle Adjani on New Yorker book critic James Wood? 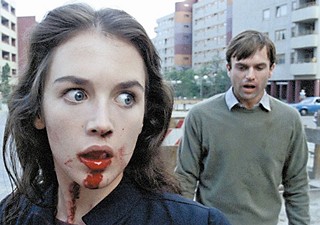 It was movie night in the Gentry/Luciani household when I got Wood's first email, so I put off responding until morning. By midnight, there were three more emails in my inbox, with links to pieces by both Wood and his wife, novelist Claire Messud – articles that presumably prove his "Sins of the Father" piece could not possibly have had any of the blind spots built into the centuries of foundational humanistic endeavor that took men's experience more seriously than women's. I began to feel I had made a straw man of James Wood – as he does to George Steiner in the first paragraph of his piece – and that I owed him, and my readers, a thorough womansplanation.

You can find my full-length critique of the Wood article in question on my personal blog, TheOeditrix.com. I'm proud to say it was recently called "a considered and very acute discussion of [Wood's] piece" by influential New Yorker book critic James Wood. My first blurb!

Assuming, however, that most readers care nothing for the intellectual fisticuffs of a couple of literary titans like James and myself, I'm taking today's column to address a minor point. In his comments, Wood impugned my reading comprehension, suggesting I am not capable of reading and comprehending something called "free indirect discourse." To defend myself from this accusation, I might have sent Wood links to my other work – perhaps even my first column, in which I hint darkly at having written a dissertation on Henry James. Instead, I want us all to take a refresher course together in free indirect style, which, after all, is the narrative mode that distinguishes us from the apes.

Free indirect discourse is a way of attributing thoughts and speech to a character without using quotation marks or other typographical cues. One can always write thoughts directly, like this:

She stared at her inbox in disbelief. "James Wood of the New Yorker has a Google alert?" she thought.

She stared at her inbox in disbelief and thought to herself that James Wood of the New Yorker must have a Google alert.

Alternatively, one could merge the third-person narration with the character's internal thoughts, like this:

She stared at her inbox in disbelief. James Wood of the New Yorker had a Google alert?

That last example is free indirect discourse, and it often reads more smoothly and vividly than either direct or indirect speech. I'm a big fan of it, and if you enjoy 19th century novels, you probably are too.

One of the chief advantages of the free indirect style, an advantage Wood himself celebrates in his book How Fiction Works, is plausible deniability. In toggling back and forth between what the narrator (or author, if it's nonfiction) thinks and paraphrasing what the characters (or subjects, if it's nonfiction) think, there is room for a dazzling array of potential relationships between the narrator and the character whose views are being represented. Skilled writers are able to register their own disapproval or endorsement of a character's thoughts simply by minor alterations in the tone with which they paraphrase them, smuggling their own opinions in without signaling them as such. This is an invaluable tool, not only for novel writers, of course, but also for columnists and book critics.

And now, let's test our knowledge! Chronicle readers, stop making all the double-O's in the headlines into googly eyes and put that pen to work underlining every example of free indirect discourse in the following prose passage:

"Babe, a thing is happening," she said. "James Wood is sending me emails and leaving comments on my piece." [Hint for beginners: If there are quotation marks, it's not free indirect!]

He paused, the Dawn of the Dead DVD hooked on his middle finger hovering an inch over the tray. "How does that make you feel?" he asked.

How could she explain? She'd been out of grad school for years. And now here was a powerful man in her field sending her reading assignments on a Friday night. She'd thought she was immune to such dynamics – [careful, this sentence is tricky!] – but now she began to doubt herself. Had her flippant remarks jeopardized her journalistic career? Or, far worse, destroyed her chance of getting her novel published by pissing off the nation's preeminent critic of fiction?

[Yes, you're getting the hang of it now!]

"Can we watch something less stressful than a zombie movie?" she said. "I'm a little freaked out."

More than a little, truth be told. Galaxy Quest flashed by on the Netflix screen, a light but surprisingly satisfying Nineties comedy with hilarious performances by Enrico Colantoni and Alan Rickman. What was Rickman's catchphrase again? But she was getting distracted. Distracted by how easy it was to portray the inner workings of the human mind without ever using a single quotation mark!

That fictional weekend, she learned a lot – about herself, James Wood, and George Romero's seminal zombie trilogy, which she watched the next night. She learned that in the Internet age, where a tree falling always makes a sound, the flimsiest slingshot has a chance of being heard 'round the world. Even as she became convinced that James Wood had, in fact, misrepresented his own opinions by failing adequately to anticipate the reader's interpretation of his own free indirect discourse, she wondered something: Had he, in fact, seen Andrzej Zulawski's Possession? With neither a direct answer, nor access to his internal thoughts through a selectively intrusive narrator, she might never know. 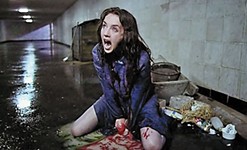 The Good Eye: Killer Outfits – Anna's Blue Dress
Isabelle Adjani is a devil in a you-know-what