Letters at 3am: The Future Dot-Dot-Dot

Ellipses express exactly my sense of the future 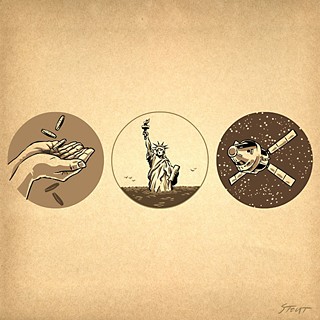 You get accustomed to the nonsense that passes for commentary. It functions as the political equivalent of elevator music. You get so saturated with empty views that when, say, The Economist editorializes a whopping absurdity, it buzzes right by until you stop in your tracks and ask aloud, in a public place, "What can these pallid motherfuckers possibly be thinking of?"

To wit, The Economist, Sept. 27: "America ... seems swamped by the forces of disorder, either unable or unwilling to steady a world that is spinning out of control."

Control of whom, by whom, and for whom?

Disorder – compared to what?

The Economist's sentence assumes an orderly world during the glory days of American hegemony.

Really? Places as various as Chile, Argentina, El Salvador, Nicaragua, Guatemala, Mexico, Peru, Cuba, Brazil, Palestine, Lebanon, Iraq, Jordan, Honduras, Afghanistan, Pakistan, Greece, Laos, Cambodia, Granada, Panama, the entire African continent, and Viet-fucking-nam might opine that circa 1950-2000 America has been the primal source of out-of-control disorder, embodying the epitome of what Tacitus long ago said of another empire: "They make a desolation and they call it peace."

Americans call that the good old days. Nations that America exploited, manipulated, and disrupted, think of those years as hell.

Our president keeps hell rolling by an unconstitutional stab at dominance through simultaneous aggression in Syria, Iraq, Afghanistan, Pakistan, Yemen, and Somalia. Plus shenanigans like: "In the first seven months of 2014, the U.S. exported $557 million worth of guided missile technologies to more than 20 countries" (The Week, Oct. 10). (What does the Nobel Peace Prize even look like? Is it actually a thing? If it is an object, can somebody beat somebody else over the head with it?)

Meanwhile ... "In a recent paper, 'The Future of Employment,' Carl Frey and Michael Osborne of Oxford University estimate that 47 percent of U.S. jobs could be automated in the next 20 years" (The Week, March 28).

The capitalist system cannot function that way. Capitalism needs workers to exploit. Automation-plus-software will create what the Daily Kos calls "The Coming 'Great Idleness'": "Neither our social consciousness nor our public infrastructure are prepared for that" (August 12).

The relations of government to citizen and of capital to the masses will change. So will the nature of capital itself. Check out the last five centuries: Technologies shape nations as much as do ideas, migrations, and geography.

What will change look like? Consider Brazil. Many nations will take Brazil as their model (though the U.S. will be last in line).

"Brazil has reduced the number of its citizens living in extreme poverty by 89 percent in just one decade. ... Brazil's program, known as Bolsa Familia, is an income-transfer plan that ensures all families receive a minimum of $30 per person per month. First implemented a decade ago, it now reaches nearly 50 million people, or one in four Brazilians. Social Development Minister Tereza Campello said critics who feared that the aid would encourage welfare dependency had been proved wrong. Some 70 percent of recipients are employed, she said, which is about the same as the proportion of nonrecipients who work" (The Week, March 28).

Give the poor money, and they spend it because they must. That's good for capitalism. A socialist idea saving capitalism? Wouldn't be the first time. Imagine the devastation of Americans today without Medicare?

Meanwhile ... there's a problem about the map on my wall.

It's a map of the world. The world it maps has remained pretty stable since the end of the last Ice Age – but by 2114, my map will be a curiosity.

Let's not argue about climate change. Just step out your front door and experience it.

What's the cause? That was important 20 years ago. Too late now. It's upon us. As Clint Eastwood says in Coogan's Bluff: "You won't believe what happens next, even while it's happening."

An orderly society would prepare for what's coming. But that's not us.

Government won't act until action is unavoidable. Citizens won't act either – there's no measurable movement of population to higher ground. We go on living our lives and hoping for the best.

So expect refugee camps that number hundreds of thousands.

Coastal and drought refugees will be uncitizens of an uncountry. God help them.

But the fact that they exist will go far to alter the relation of citizenry to government. It will happen differently here and there, but it will happen.

You won't hear about terrorism anymore. We'll be too busy drawing new maps and creating new relationships of power to un-power. And, really, just trying to stay alive.

(I expect a blaze of culture to crazily blast out of those camps. It can be amazing, what goes on with people who have nothing left to lose.)

Axiom 1: A society organizes itself around its ability to exert force, but its culture is rooted in how it perceives beauty.

Axiom 2: Life is a series of unintended consequences.

Corollary: Control is not a human possibility.

Axiom 3: All parameters are permeable.

Boris Pasternak (roughly remembered): "Life is infinitely beyond your or my obtuse theories about it."

Hope is a demand that life lives up to one's expectations. Despair is a pout because one didn't get one's way. Hope and despair are, as they say, "all about you." The world is crazier and funnier and more horrible than that.

Back to the environment ... I'm troubled because: Why doesn't this climate-change shit depress me?

It's that I see no distinction between humanity and nature. Their separation is a false dichotomy that monotheism embedded in our psyches 5,000 years ago, in the fit of self-importance that monotheism essentially is.

Humanity is an element of nature, one with nature's evolution, and also a force of nature. We have acted upon the planet and the planet is returning the favor. Nature is acting upon nature. We are one. Our era is, as Marcus Aurelius put it, "the World-Nature speaking through circumstance."

Our planet, larger and wiser than we, is an entity. Its task now is to be our guide, not "back to nature," because, being nature ourselves, we never left, but rather a guide to changing our unsustainable way of life. We will adjust and be sustainable (goodbye, capitalism) or we will ....

Ellipses express exactly my sense of the future ....