The Luv Doc: No Strings Attached 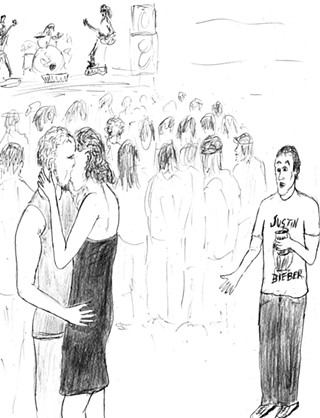 Dear Luv Doc,
So, I’ve been hooking up with this dude for a few months now, but he never wants to actually go out – for fear someone may think we are dating. We aren’t dating. The screwing with no strings attached is good for me. When we see each other in public, he says “hello” and ignores me the rest of the time. Went to a show recently and didn’t know “dude” was there. One of my friends drunkenly kissed me on the mouth a few times. Then “dude” let me know he was there and wanted to take me home that night. Now, two weeks, later he informs me he saw the other guy kiss me and thinks we shouldn’t “see” each other anymore. What’s the actual problem here – him or me?
- Not Dating

My bet is that he’s worried you now have mouth herpes – which is the statistical result of drunken kissing at least 20% of the time. Wait, that doesn’t make any sense. Why would he want to take you home? Maybe he likes the exhilarating rush of gambling? Maybe seeing other men kiss you is a huge turn-on? Did he mention that in his Tinder profile? When you’re doing it no-strings-attached, you might as well get all your fetishes out in the open.

By the way, I commend you on attempting a no-strings-attached relationship. That shit is adorable. There is something about naive optimism that warms my heart and makes me grin like a goddamned idiot. After all, if we didn’t try so hard to live up to our unattainable ideals, the world would be a boring place, wouldn’t it? At the very least, there would be a lot less bloodshed.

OK, I am going to have to ask you to trust me on this, but there is no such thing as a no-strings-attached relationship. The phrase itself is an oxymoron. Even if you do manage to bump uglies without getting all emo, you’re still going to leave DNA strands for the forensics team to connect some dots. (Thanks, God! You ruin everything!) And then there is that whole emotional attachment thing, which in your boy’s case may simply be insecurity manifesting itself as possessiveness, but either way you got yourself a string and he’s pulling it, otherwise you wouldn’t have a problem, would you?

Really, the only problem I see here is the untenable ideal of your no-strings-attached relationship. Sure, he could be more secure and let you drunkenly snog on your friends at shows and you could be chill about him not acknowledging you in public, but those feelings will inevitably come up and you will have to deal with them. Sounds to me like he’s acknowledging this and checking out – maybe for his own mental health. If you ask me, that’s not a problem, it’s a solution. Maybe you will find your own.