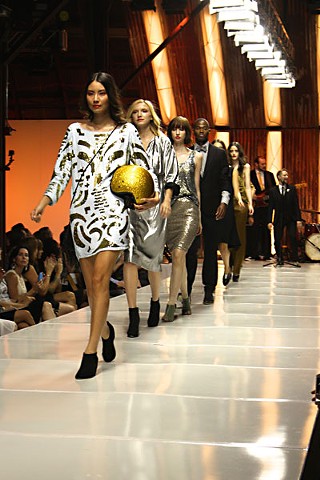 If only Tribeza hadn't dubbed the 11th annual Tribeza Fashion Show "The Story of Austin Style."

The story went something like this: Once upon a time, some models got called to put on a runway show while they were still in their lace-trimmed skivvies. There was no time for pants, so they just pulled on Helm boots – a lucky few grabbed denim jackets from Feathers – and then sallied bravely down the runway, just eight gorgeous young ladies with nothing to hide. (All female – no male models in the scantily-clad portion of the show.)

Next, they went shopping at some designer boutiques – mostly Kick Pleat, By George, and the Garden Room – and swung by some high-end consignment shops – Moss and Archive – to round it out. They sauntered down the runway in a series of soft brown and beige looks meant to evoke the Texas landscape; jauntier outfits paired with black ankle boots and ombré clogs evoked cities, which we are also fortunate to have in abundance here in Texas. Finally, it was time for their Big Night Out, so they donned cocktail dresses of muted gold and flashy silver and crystal-clear paillettes, hoisted glittering motorcycle helmets on flashing hips, and strode off into the sunset. The End.

The clothes, chosen and styled by Sara Oswalt, looked good. If I had seen them on the street – excepting the knickers – I would have thought, Yonder goeth a stylish woman! A baggy silver Pauline Trigère dress from Archive Vintage looked particularly cool; so did a Suno dress from By George in stripes and polka-dot jacquard. God knows, an Hermès dress bought from Moss at a fraction of the original price will always lift a girl's spirits! Yet, for the most part, there was a flat kind of fetishism to the labels that didn't quite translate on the runway. Despite the fact that the Nightowls were killing it onstage with live Stevie Wonder covers, the retail parade felt a bit like looking through the closet of an exceptionally cool girl and finding out that her clothes are much more expensive than they look. Moreover, it went by so fast – 60-plus looks in less than half an hour, bookended, fore and aft, by hourlong bouts of air-kisses and untouched cupcake tiers on the Fair Market lawn – that the runway felt a little beside the point.

The Story of Austin Style? The Story? Of Austin Style? Maybe it was the shiny black Lexus SUV parked next to the VIP lounge, but something about the show just didn't scream "Austin." Where were the drag queens? Where was Willie Nelson? Where was the fun?

Maybe I just have fashion fatigue. After all, I have been rather zealously keeping track of the Spring 2015 shows in New York, London, Milan, and Paris; in the past three weeks, I have studied some 300 collections, which is, at a conservative estimate, around 10,000 "looks." Maybe when I finally got to a venue filled with real live chain-strap Chanel bags and leather culottes, something in me just snapped.

Or maybe, I just need to accept where I am in the Five Stages of Fashion. Here's a refresher:

1) Denial You're not really into fashion; it isn't for you, because you are not a shallow person! To prove it, you wear only knee-length cut-offs and oversized T-shirts for years, causing your parents to fear that you're a lesbian. They're at least half wrong. (Happy Bisexuality Awareness Day, everyone!)

2) Anger Active rebellion begins when you realize, in a college women's studies course, that you are not actually immune to fashion's insidious influence. The barrage of magazines and advertisements showing pictures of women half your size (and, someday, half your age) wearing clothes you can't afford has seeped like contaminated groundwater into your psyche and permanently mutated your cells. You take up smoking. You say things like, "I just think it's disgusting how everything in the mall has been, like, specifically made to convince me to buy it." You decide to dress like a man from the Seventies forever.

3) Bargaining, aka "No ideas but in clothes." Years of combined grad school and talk therapy prompt you, finally, to appreciate fashion as an art, a shifting set of forms in perpetual dialogue with, but not limited to, the female body, balancing elegance and ugliness, normalcy and rebellion, in an endless dialectical dance. You concoct ambitious theories about the cultural meanings of garments. You call clothes "garments." Dangers of this phase include an infatuation with caftans, the sudden very real possibility of wearing lingerie in public, and a yearning for scarves in the triple-digit price range, because just look at that weave.

4) Depression How could you be so blind? Fashion is a soul-sucking waste of planetary and personal resources. You begin to wonder what problems in your life – perhaps the world! – you could have solved if you weren't spending so many brain cells on words like "bodycon" and "organza" and "Jeremy Scott's Shrek sweater." No wonder you couldn't get an academic job out of grad school. At the Tribeza Fashion Show, you start wondering whether you can really tell the difference between a real Chanel chain-strap and a fake one. And if you can't, what's the point? Not just of Chanel chain-straps, but of literally everything.

5) Acceptance Maybe it's that hint of crispness in the air, such an unexpected gift in Austin anytime before October. The birds are chirping, the sky is clear, the cat didn't poop on the bathmat last night. Suddenly, the whole question of whether fashion is liberating or confining seems kind of – overblown. You head to Blue Velvet – you know, that vintage shop that celebrated its 20th anniversary this year? Where you bought your first Fifties party dress in 1999? It was on Red River back then. Or was that during its Guadalupe period? Anyway, it's on North Loop now, and it feels like it'll always be somewhere in Austin. Some might even call it an essential part of the story of Austin style.

Check out some of the best looks from the Tribeza Fashion Show in our online gallery.