Letters at 3AM: A Long Goodbye

In the first of four parting columns, Michael Ventura announces his decision to end his biweekly column 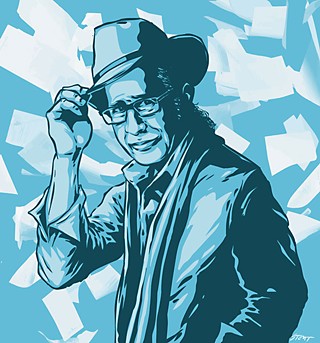 I have two rules about writing this column and I just broke the first – twice: Never use "I" in the opening paragraph.

Because, strange as it may seem, and no matter how personal it gets, the column hasn't been about "I" – though this one is. Rather, I've thought of it as letters to somebody who matters. There's no point to this otherwise.

The purpose has been to bear some kind of witness – witness to events, scenes, ideas. Journalism in its original sense: a journalist as one who keeps a journal, from the French jour, day – a record of the day, the era. I've seen my life as a medium through which I accomplish this task as a writer.

Hmmm ... that sentence troubles me. It may be bullshit. Wouldn't be the first time. But maybe it's not. I'll let it stand.

F. Scott Fitzgerald tried to explain in The Last Tycoon: "It was my first inkling that he was a writer. And while I like writers – because if you ask a writer anything you usually get an answer – still it belittled him in my eyes. Writers aren't people exactly. Or, if they're any good, they're a whole lot of people trying so hard to be one person."

Also bullshit? I don't know anybody who isn't a whole lot of people trying to be one person.

Ask why I write. I have no satisfactory answer. I write because I can't not.

How do I choose my subjects? It feels like they choose me. (Again, we're in the realm of possible bullshit.)

As you see, I can write about my experience, but not about myself.

There is a distinction, and that's not bullshit.

There is your experience and there is you yourself, and they are different, and if you stare into enough mirrors long enough you learn this is true.

Broke my first rule right off, and, in the process, broke my second: Never write a column about writing the column.

I do so tonight to announce, awkwardly, that The Austin Chronicle will publish the last "Letters at 3am" on November 14.

As Raymond Chandler wrote, "There are reasons ... and reasons for the reasons."

My reasons have titles: The Dragon, The Poetry and Notebooks of Mario Berlotti, Mook, The Other Mary, The Walls of Heaven, My Mother Was a Spy, One Marilyn Too Many, Reading the Gospels Naked, Unforeseen Meetings and Matters of Yesterday – books unwritten or half-written or in need of one more draft, each trailing hundreds of pages of notes and sizable libraries of reference material. I'm too old and tired to have so many ambitions, but there it is.

I've been writing The Dragon for going on seven years, and I'm one-third done. To complete it, I must let the column go. Last November, I told Louis Black, Nick Barbaro, and Marjorie Baumgarten that on October 31, 2014 – 40 years to the day since The Austin Sun published my first piece – I'll write my last for The Austin Chronicle, to appear November 14. That's three columns from now.

Then, last January, I had a stroke.

It was terrifying. (But I still made my deadlines.)

Not to worry. Tests show I'm healthy – 'cept I had a stroke. The lasting casualty is my infamous Ventura stamina. That guy who'd work many, many hours straight, until he literally slid off the chair to sleep five hours and do it again – that guy left the fuckin' building and he ain't comin' back.

My general stamina is OK. What's gone is the stamina of my best concentration – the quality I employ to work (or drive).

Post-stroke, I have my best concentration for about two hours, then I falter and must stop. Hours later, I may work (or drive) another two. Or I may not.

So I put my Dragon aside to complete the 40th year of this gig.

This column begins my long goodbye.

My mother was dead set against rituals of goodbye – at least, as far as concerned her eldest. She cultivated, in me, two qualities in contradiction: I must be very tough, but also terribly sensitive – a wonderfully crazy recipe for cooking up a man who'd be the kind of woman she was, and, at the same time, who'd be her sweetheart movie star, Leslie Howard. She'd idolized him in The Petrified Forest, The Scarlet Pimpernel, and Gone With the Wind. I was to be the man she once thought my father could be, and so redeem her choice of husbands and Pa's utter and horrendous failure to be Leslie Howard.

But I, too, failed to be Leslie Howard – because I was busy failing to be John Garfield. (Garfield was another now-obscure star. Think Humphrey Bogart, but way more street.)

I am saying a large goodbye right now and not feeling especially tough, though my mother's toughness wins through in another way: I want my final columns to be about something. Don't want to go out schmaltzy.

Forgive the sports metaphor (another rule broken): His last time at bat, this old pro wants a solid hit.

So this is goodbye. Much more, it is: Thank you. Naked words in which nothing, but nothing, must be taken for granted. Especially ...

At The Austin Sun: Jeff Nightbyrd, who gave me my start – and Paula Latimer, J. David Moriaty, Carlene Brady, Sara Clark, Martha "Marty" McKenzie, Bill Bentley, Eric "Enrique Pasa" Rosenblum, Margaret Moser, Dan Hubig, and, above all, James BigBoy Medlin. (In a reversal of the usual, we were so much better than we thought we were.)

At LA Weekly: Ginger Varney. My other significant Weekly colleagues will understand why here Ginger Varney gets every bulb in the marquee.

At The Austin Chronicle, where I have worked 21 years of a 40-year gig: The faith, generosity, and loyalty of Louis Black and Nick Barbaro – it humbles me, the way you guys made a place for me to do what I do, untrammeled, unhampered. A writer's dream. And ...

The Chronicle's intrepid crews of fact-checking proofreaders – you saved me again and again from looking the fool. If I were a large audience I'd give you a standing ovation.

And Jason Stout, a prince among illustrators.

And, ah, Marj – my editor all these years. I used to have a rep as an editorial hothead just because I threw a chair out a second-story window – a window that happened to be closed – when LA Weekly's editor/owner pissed me off. In 21 years, Marjorie Baumgarten and I have never argued. 'Cause I just figure Marj is right. Once in a while, I get a niggle that she's not – but I still figure she is, so I go by what she decides, and I'm never dissatisfied.

Marjorie Baumgarten is a professional's professional. If there's any higher praise in our line of work, I've not heard it.

Okay. That's the goodbye. After three more columns, I'm hanging up my guns, taking down my shingle, riding into the sunset, disappearing down a subway tunnel – sitting on a park bench.

I've said this before, but this is the place to repeat it:

It happens that in Lubbock, Texas, where I live, sometimes a grocery clerk, a hospital nurse, or someone in line at the post office, cocks a look at me and says: "Mister – what do you do?"

Almost every time their response is precisely: "That's cool!"

At the moment, there's nothing left but the obvious:

The obvious and shudderingly deep thank-you, which abuts the obvious reality that one comes and, sooner or later, one is gone.

So. Three columns to go.