The Luv Doc: In Through the Out Hole 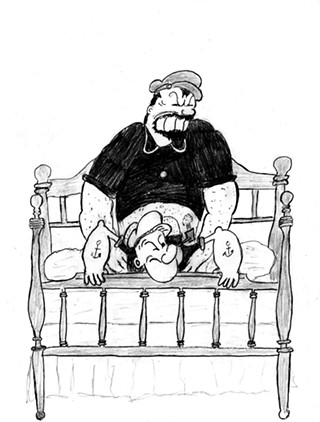 Dear Luv Doc,
How can I convince my husband to let me strap it on and stick it in? He claims he is an “exit only” man.
Peggy

What you have here, Peggy is an excellent example of the conflict that can arise between the theoretical and the empirical. Yes, sometimes the two dovetail, but as often as not there is … um … friction caused by … uh … incongruities. Your husband has no doubt explored the theoretical and decided, based on what I am sure he presumes to be an abundance of empirical observation, that his Hershey highway is a one-way thoroughfare.

I can’t fault him for that. Like singing and dancing, everyone is a self-appointed expert when it comes to anal sex - even and especially if they’ve never done it. (For contrarians and doubters, please note the tremendous success of American Idol and Dancing With the Stars). Anyone who has ever sweated and strained for what seemed like a white-knuckled eternity passing a turd that felt like the Titanic only to look into the bowl and see a gnarled Tootsie Roll with a hemorrhoid blood garnish knows that regardless of our boundless ambition, human achievement has its limits. Yes, we have landed on a moon, but have we passed a watermelon through one? If we have, please don’t send me the video link.

Lastly, when you’re dealing with straight males, you have to contend with the whole sexual identity issue. Does getting fucked in the ass by a woman with a strap-on dildo make me gay? Deep, huh? You probably didn’t expect this response to spin off into some sort of esoteric rhetorical discourse on sexual existentialism, did you? But seriously, if Popeye got ass raped by Bluto (Let’s be honest, without spinach, he would definitely be Bluto’s prison bitch - albeit a more constipated one) would he still be who he is? This is the kind of asinine stuff straight males lose sleep over.

So, if you’re trying to sell your husband on taking it in the out hole, don’t start by assaulting his masculinity. A better approach would be to focus on cleanliness, safety, and pleasure, and maybe explore the notion that sexual identity isn’t defined by who is penetrating who. Or you could go with the Tom Sawyer method: By convincing him how much you like it, he’ll want to try it, too.