The Good Eye: She of Many Hats (and Antlers) 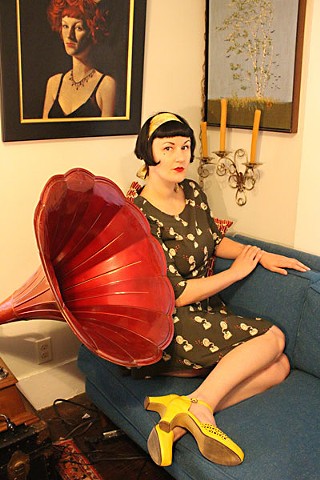 Messy but interesting, to judge by Amelia Raley's East Austin rental. Looking neat as a pin herself in a novelty ice-cream-print dress, red lipstick, and yellow vintage pumps, Raley apologizes for the clutter – she's been nursing a repetitive stress injury after a particularly busy week scooping ice cream at Sweet Ritual, the vegan ice cream parlor she opened with co-owner Valerie Ward in late 2011.

In the past two and a half years, Sweet Ritual has gone from two to five employees and expanded from two flavors of vegan soft-serve to 16 hard-scoop flavors, with pints sold in local stores such as Wheatsville and in.gredients. They were recently filmed by the Food Network, and are currently raising money to buy a new soft-serve machine. Although they share retail space with JuiceLand, Sweet Ritual has its own distinct aesthetic of DIY-inflected nostalgia, with custom counters by wood artist Lance McMahon and Raley's own antique phonograph lamps hanging over the countertop.

About those phonographs: Raley is also a wedding DJ, and these are the tools of her trade. "I have two hand-crank phonographs, one from 1907, the other from 1927. I play turn-of-the-century records, mostly hot jazz." She plays lots of cocktail hours and, after Gatsby, flapper weddings.

As you might expect, there's a performance-art aspect to phonograph DJ'ing. The giant lily-shaped phonograph trumpets are visually stunning, as is her costume which she calls "flapper sculpture." But she's hardly immobile: "I have to crank the machines and flip the records and change the needle, so there's a lot of technical stuff you're watching. Maybe alchemy's the wrong word, but you're taking this flat thing and putting it through the machine .... It's way more magical than pushing a button on an iPod. It's almost like a Rube Goldberg machine."

The Twenties and Thirties influenced Raley early – "I think the first thing I ever typed into an AOL search engine was 'flapper'" – but she remembers thinking about style even before that. "I broke this invisible barrier of wearing more than two bows on my head at the same time," she recalls. "On the playground people would be like, 'You can't wear that many bows in your hair!' And I was like, 'Who says?' I thought it was really funny that there were these arbitrary rules."

Looking around, I can't help but think, "what rules?" Raley collects boudoir dolls and Luxor powder tins from the Twenties and Thirties; her walls are festooned with her own hand-embroidery work. (She used to sell hand-embroidered cum-rags on Etsy, but, despite being upvoted prodigiously on Reddit, no one ever actually bought them.) A former fashion blogger, she freely mixes decades in her outfits, but her Clara Bow lipstick and Theda Bara hair are a constant.

Being a small-business success story has, however, changed some things. As a blogger, "I used to document what I wore every single day. Now that I have this ice cream job and I'm covered in ice cream, I wear yoga pants almost every day with different [Sweet Ritual] T-shirts. I don't think anyone really appreciates that style except my friends' dogs, who like to lick off the ice cream detritus. That's been a thing to come to grips with. Because I did dress up, for so many years. Now I can't, because I would ruin my clothes. That's been a big identity shift for me."

Still, Raley gets plenty of dress-up in. The former Vintage Vivant vixen is now part of a local group, along with offbeat-fashion powerhouses such as Angeliska and Coco Coquette, known as Krewe du Bisoux. Together they throw Mardi Gras-style parades for Day of the Dead and Twelfth Night, which Raley prefers to Halloween and New Year's Eve.

It was precisely for a big local costume party that Raley made her first antler headdress. Yes, that's right, she's got a third business, selling antler headdresses on Etsy that have been tapped for television commercials, fashion shows, even America's Next Top Model. Last week she got a call from Lady Gaga's people. They wanted to "borrow" a pair of horns. Her answer? These days her antlers are strictly pay-to-play, says Raley. "Lady Gaga has $100. And let's face it: She's going to wear them again."