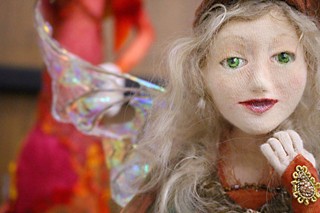 Did she just blink? (Doll by Kathleen Vaughan, pattern by Angela Jarecki.) (Photo by Amy Gentry)

I went through a doll phase from age 10 to 14. It started when my mom gave my sister and me the Madame Alexander dolls of her girlhood: Meg and Beth from Little Wom­en. Amy was next for me, naturally; my sister, to my chagrin, got Jo. We exhausted Louisa May Alcott's oeuvre, and I moved on to Gone With the Wind and fairy tales. I loved the tiny strand of pearls woven into Rapun­zel's braid, the tassels on Scarlett's velvet curtain dress. Doll-sized, the cheapest scrap of leftover trim becomes impossibly rich.

A doll is a small-scale human figure, traditionally belonging to a girl. The dolls made for boys to play with are called "action figures." A doll is not an action figure. Dolls are quite passive. You can play with a doll just by looking at it.

Looking at classical sculpture is supposed to be transformative; it imposes universal ideals of beauty, proportion, and grace on the observer. Dolls, by contrast, are transformed by their observers, by the very fact of being observed. Dolls are never universal; the more detailed and specific, the better the doll.

That's what makes them infinitely collectible; objects of passion. Jewelry designer Suzie Gal­le­hugh told me about her first job out of design school at the Madame Alexander company in New York. When collectors toured the factory, she hid the dolls she was working on. Grown women would steal them.

"But what exactly is a doll?" I asked a friend. "Something you get called by construction workers," she said.

Dolls are passive, but girls playing with dolls don't want to be dolls. They want their dolls to be them. Whenever possible, girls make dolls in their own image. Just check out the American Girl empire.

Last week an Orange County community panicked when vacant-eyed, dust-ruffled dolls began appearing on the doorsteps of families with girl children. It turned out to be an elderly woman anonymously divesting herself of the fruits of a lifelong hobby. The mothers all swore the dolls resembled their daughters.

Dolls change to reflect us. We clothe them in our desires and our fears. We read our own emotions in their staring eyes.

"All Dolls Are Art," says the sign in the lobby at the Wyndham Garden Hotel. The All Dolls Are Art Confer­ence and Retreat's founding director Amy Nel­son first encountered art dolls at the Inter­na­tional Quilt Festival in Hous­ton during a failed effort to get herself interested in quilting. An engineer at Dell, she wanted to tap into her creative side, but she quickly found she wanted more than two dimensions.

Dolls are fast because of their size, says Nelson. You can finish one in two weeks, or even over the course of a single, daylong class. Dollmaking involves many skill sets – sculpting polymer clay, stitching and molding and painting tiny fabric faces, draping and patternmaking, collage and decoupage and quilting and embroidery – but it comes fast. Each doll is a miniature crash course, as well as a finished product.

The dolls in the exhibition pick insistently at the border between pretty and creepy. Some, like Nelson's, lean toward the whimsical. Others, like Theresa May's "There Was an Old Woman" or Clarissa Callesen's distressed baby dolls, actively court horror, deconstructing bodies and embedding them within other bodies, adding extra legs or arms, replacing torsos with cages. Almost all the faces on display are female.

Dolls are sentimental. They talk to you about yourself, and you whisper your secrets in their shell-like ears. In that respect, they have more in common with holy icons than action figures.

With their frozen curls and flounces, their buckled shoes and their tiny, trapped expressions, dolls are permanently caught at the very edge of gesture. Waiting to be animated by a human glance.

The word "passion" comes from the same root as "passive." Also: "patience." It originally meant suffering.

Check out the online gallery for portraits of the eerie, beautiful art dolls from the All Dolls Are Art Conference (www.allartdolls.com).