The Good Eye: Painting With Clothes

Take a trip back in time: Just make sure you're properly outfitted for it 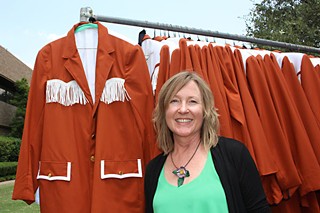 Kari Perkins wears cowboy boots, a flowing green shirt, and a flower necklace made of soft leather to our interview. It's a workday for her; the Austin-based costume designer is wrapping the costumes for her most ambitious project to date, the Angelo Pizzo-directed UT football film that takes place during the 1968 and 1969 game seasons.

Perkins and her team outfitted 400 people each day in period costumes with multiple changes, including hundreds of football uniforms – most of which she had re-created from scratch, and then distressed and aged.

"I had to get the uniform fabric milled, because they don't make that kind of jersey fabric anymore," she says as we walk through what seems like acres of costuming in the former AMD building. "That was important for high-definition – so you could see that little bit of sheen in there, to give it a period look."

Although Perkins was raised in Texas and came to Austin in 1982, football wasn't exactly her first love. Now? "I know more about football now than I ever thought that I would in my entire life." All of the pads, cleats, and helmets had to be made new with modern padding inside, so that realistic reenactments of football plays could be executed safely. Not to mention her extensive historical research into band uniforms and cheerleading costumes.

Perkins specializes in what's called "invisible costume design," meaning that she creates realistic costumes that enhance the storytelling without calling attention to themselves. This is what separates Perkins' films from, say, American Hustle, whose admittedly gorgeous costumes often took center stage. In a film that's all about artifice, it's okay to give fourth billing to a wrap dress; but the soft-spoken Perkins, who got her big break working on Dazed and Confused and has worked with Richard Linklater many times since, seems to share his brand of warm but rigorous humanism.

"How do you enhance this character, but make it subtle enough that it's going to enhance the whole performance and not be a distraction?" is her primary question.

It's safe to say that the costumes in My All Amer­i­can will stand out most to those who were actually there the first time around. Many of the clothes are authentic, not only to the time period, but to the region – like the racks and racks of men's wool suits and jackets, many of which still bear original tags from Fort Worth or San Antonio department stores. She even knows the temperature and weather on each game day re-created in the film, like the cold, drizzly Arkansas game where the stands were a sea of ponchos.

But costumes, Perkins says, reflect more than just historical accuracy. They also reflect the psychology of the characters over the course of the film, and can even help create a rapport between the actors themselves and their characters.

Her example is from Bernie: "When I was first meeting with Jack Black and I was trying stuff on him, he was wearing things very much like Jack Black, which is natural, but he was just feeling like himself putting on clothes. I said, 'Why don't you try hiking your pants up over your belly, like this?' All of a sudden it was like his physical stance changed. It was like this morphing. Bernie started to come out, right then."

Add to all this the need to balance colors onscreen, so that characters neither clash nor fade into each other within a frame or from shot to shot, and you've got a lot to keep track of. "A photographic memory helps," says Perkins. So does a six-inch-thick continuity book loaded with snapshots and scene details.

Perkins – who, after all, chose to build her career and her life in Austin – would rather be poring over old Cactus yearbooks. "In one yearbook for 1968, the skirts are to the knee. Then in 1969, you can see where they just folded the hemline up to make them short. You can actually see the fold."

This is precisely the kind of detail Perkins loves: the barely visible mark of experience that makes every piece of clothing into a story.

Take a sneak peek at the costumes in My All American in this week's online photo gallery.