The Good Eye: In Praise of Last-Resort Wear

It's official: You may wear caftans 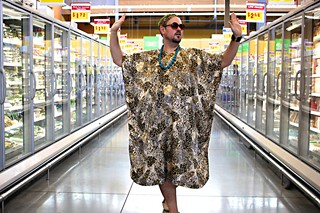 It's the summer of the caftan. The long, flowing, unisex garment has been preparing for its close-up since Mary-Kate Olsen first donned a silken 39-gallon Lawn and Leaf bag on the red carpet in the mid-Aughts; last year, when her high-end label the Row sent the quintessential caftan down the runway, it was like watching a bohemian flower finally burst – or, as it were, billow – into bloom. Resort 2014 was lousy with them, and while fashion-heads may be ready to move on to deconstructed volume pieces like Chloe's caftanesque separates, the single, simple, floor-dusting rectangle of fabric is officially wearable.

Caftans as resort-wear are nothing new; the giant envelopes of embellished fabric practically scream "I plan to do nothing more challenging today than lift this mojito glass to my lips while alternately napping on a divan and skimming through my favorite Barbara Vine novel." What's new is the interpretation of "resort." As in, one must resort to sartorial acts of rebellious fantasy when August looms, the air conditioning is spotty, and one simply can't manage the Hamptons this summer – or, for that matter, the Hampton Inn in Nacogdoches. I scored my caftan at the warehouse-sized House of Vintage while on a house-swap vacation in Portland. At first blush, I confess, I viewed it mainly as loungewear. But should it be? When Angelina Jolie, Uma Thurman, and other drama queens are wearing caftans to gala affairs, shouldn't I be wearing mine at least out to the H-E-B, inspiring "baby bump" and tattoo-gone-awry rumors among my friends and neighbors?

The key to caftan dressing outside the home is straight-up panache, and the key to panache is accessorizing. A jeweled sandal or statement necklace politely informs the curious spectator that you are draped in fashion, not brain fog. Many think the caftan itself has anti-depressant properties beyond the uplifting effects of an uninhibited lungful of air; just ask Isadora Duncan. (But do watch those trailing hemlines around escalators and other motorized people-movers. A good caftan isn't worth dying for.)

One couldn't do much better for caft-cessorizing than local jewelry line Suzanna Dai. A Houston native and graduate of UT-Austin, designer Suzie Gallehugh recently moved back to Austin after establishing her line of splashy, over-the-top appliqué jewelry in New York. I recently talked with Gallehugh at Jo's on Second, across the street from Eliza Page, where she had a trunk show not long ago, and around the corner from her Downtown loft. During her 13-year stint in New York ("New York's kind of a time vortex, suddenly it's five years later and you're like, where did the time go?"), Gallehugh gained experience in embellishment-heavy corners of the fashion industry, briefly designing Madame Alexander doll clothes and "accessories-based" table-wares, including beaded and embroidered fabric meant to look almost like jewelry.

So it's not really surprising that Gallehugh, who taught herself beading and embroidery skills as a child, turned to jewelry itself. Inspired by the intricate geometric patterns like those found in Twenties deco beadwork and Native American textiles, Gallehugh designs her custom appliqués on fabric backing. The edges are then tightly bound with metallic embroidery thread and backed with subtle, soft suede. The result is statement jewelry that weighs almost nothing: chandelier earrings that don't drag at your earlobes, a breastplate pendant that doesn't give you a neck ache, a Wonder Woman cuff you don't have to remove to type. Sure, you could wear them with a white T-shirt and designer jeans, as Gallehugh was when we met for coffee. Or you could throw them on over a floor-length, embroidered caftan with some fabulous platform sandals and go – well, I hear the cafe at the new H-E-B is pretty good.

For images of caftans in the wild, check out this week's online photo gallery.

The Good Eye: Closet Therapy
Peeling back the layers of clutter to an organized you