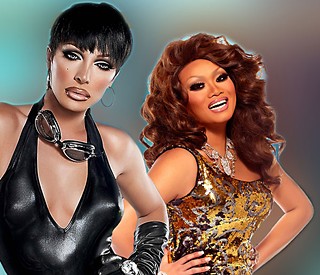 SHEBOOKS SHEBANG WITH MARION WINIK E-books from Shebooks and a delightful ol' pal/expat (who used to galavant all around this town and even contribute to this very paper). Thu., July 17, 7-9pm. BookWoman, 5501 N. Lamar. www.marionwinik.com.

ANNUAL PRIDE CONCERT If you've not been to one of these concerts, do yourself the edifying favor. Mr. Russell Reed & co. have raised the dough-re-mi to bring the works of Ben Weber, Julius Eastman, and more, aka high art, your way. The gay way. Thu., July 17, 7:30pm. St. James' Episcopal Church, 1941 Webberville Rd. www.austinchambermusic.org.

'AUSTIN CHRONICLE' COOKOUT Soaking in Riders Against the Storm (and many more) while nourishing to Cazamance? All to benefit SIMS? Yes, please. Keep an eye out for some Gay Placers. Sat., July 19, 5pm-12mid. The Scoot Inn, 1308 E. Fourth. austinchronicle.com/cookout.

SUMMER LOVIN': FREE BEDPOST CONFESSIONS Lotsa nice li'l nooks and crannies at the Butterfly for you to get your confessin' on. Free audience appreciation event. Wed., July 23, 7pm. Butterfly Bar at the Vortex, 2307 Manor. Free. www.bedpostconfessions.com.

DEEP INSIDE AT THE VULCAN Regular residencies by DJs Dylan Reece, CBass, and Mouthfeel. Visuals by Julian Eternal and Sarah Megan will get you in that pre-1970 vibe. Or not. Every other Thursday, 9pm. Vulcan Gas Company, 418 E. Sixth. www.fb.com/deepinsideatx.

SAN MARCOS PRIDE 2014 NEEDS YOU! San Marcos Pride is a go. Whoooo! The kids behind Rainbow Night have been hard at work getting this together for September, and all's they need is you. Hey, Bobcat Qs, allies, and Austinites who just want to see neighbor pals enjoy the same tolerance and acceptance we feel here in the big city, come lend a hand. San Marcos Pride seeks volunteers, performers, graphic designers and printers, hotel partnerships, vendors, and especially $ponsor$. Call or email Silvia. Let's do this. Coming September, 2014. 512/644-5637. sylsandoval@gmail.com.