The Good Eye: Professionalism vs. Fashionalism 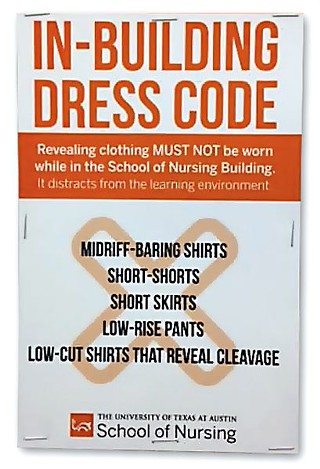 The offending dress code sign was eventually taken down because it was too distracting.

After an unusually cool spring, summer has finally kicked into high gear in our fair city. Cue the hand-wringing about scantily clad ladies, most recently in the form of a sign at the UT School of Nursing forbidding female students from wearing short-shorts, crop tops, low-cut shirts, and other clothes the sign's author deemed "distracting."

As I planned my Father's Day column this week, perusing the selection of fashionable American-made men's goods that will be available at the Northern Grade pop-up market this weekend, I couldn't help but notice a dramatic dearth of crop tops. Hip menswear, of which I wholeheartedly approve, features nostalgic, outdoorsy motifs, an artisanal version of the hunting-and-fishing fantasy peddled by L.L. Bean. Nothing likely to ruffle the feathers of a school administrator, unless the handmade suede boat shoes reveal too much toe cleavage.

This got me thinking about the role of the fashion cycle in dress code kerfuffles like the one kicked up by the UT sign, which has since been removed. In response to criticism that the sign didn't mention any restrictions that would apply to men, too – such as a ban on flip-flops, tank tops, or the dreaded jorts – Associate Dean for Academic Affairs Gayle Timmerman clarified in an online post that while the nursing school requires "professional" dress from all students, the signs do not accurately reflect school policy. "We're not in the business of measuring skirt lengths," she wrote.

In fact, anyone who follows fashion can tell you that skirt hemlines have plunged below the knee in recent seasons, and that the "low-rise jeans" that the sign forbids haven't dominated denim since 2008-ish.

Meanwhile, however, buying a pair of attractive, fashionable shorts this season that doesn't qualify as "short-shorts" according to somebody's standards is nigh impossible. What often gets left out of debates like this one is the simple acknowledgment that changing fashions – fluctuating hemlines, necklines, fitted cuts, sheer fabrics – affect women more than men, and that navigating them while maintaining a perception of professional competence in school and work environments is an ongoing and often exhausting task.

Participation in the fashion cycle isn't evidence of weakness or feminine exhibitionism. It's a constant negotiation that women opt out of at their own peril. It is a truth universally acknowledged that, for better or worse, dressing too "trendy" can make women look less competent. But women who neglect fashion entirely are discriminated against in subtler ways, by both men and women. Women are judged far more harshly on their attractiveness than men are in the first place, so it's unsurprising that women's fashion would be based more on body-flattering shapes than would men's. Men may complain, rightly, about how stifling suits can be in the summer, but while they may sacrifice comfort to professionalism, they seldom sacrifice fashion in order to dress conservatively.

I suppose on the day that butterfly-cut short-shorts become staples of men's closets, we can claim that conservative dress codes aren't inherently discriminatory, but for now, women are caught in the double-standard all by our lonesomes. Standing in front of the closet every day, a woman balances dozens of factors in addition to physical comfort, including the places she is likely to go, the age and gender of those around her, and how she feels about her own body at that precise moment. Moreover, the margin for error is vanishingly thin. Most women have had the experience of donning a dress, skirt, or blouse that looked perfect (and perfectly professional) last week, only to find that since she's gained three pounds, it suddenly looks too tight, too short, or too cleavage-y. Men's clothing tends to be rather more forgiving.

Even when it's not, though, we always have a choice about our own responses. When a male model slowly pulls off his sweatshirt in class to reveal a mesh tank top beneath, the women around him are neither blind nor immune to the distraction. But we also understand what it's like to be considered eye-candy, how quickly that gaze can turn from approving to damning on a hot day. And there are a lot of hot days ahead.