Letters at 3AM: Hitting the Street 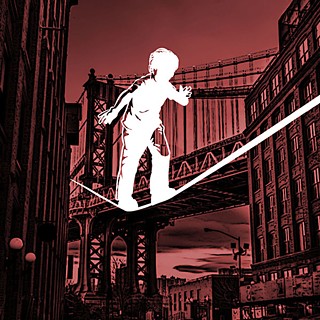 If "street kid" conjures in your mind a tough, svelte, hip urchin – well, street kids like that exist, but they're the ones the street kills first. For every movie-worthy street kid, there were dozens of us hanging out in the background, alert as cats – fire-escape kids, rooftop kids, alley kids who knew how to blend right into the bricks and survive.

"Street sense" is not like in the movies – it's not digging the score about every badness on the block. Street sense is knowing any shadow might hurt you. Street sense is respect for those shadows, with a knack for spotting capital-C Crazy from across the street, and even from around the corner. Knowing how to go from here to there without getting your ass handed to you.

(Since those days, I've seen flashy toughs in settings high and low. As they flash their flash, I remember my brothers and my cousins, and I think: Baby, we survived for years in places where you wouldn't last the afternoon.)

A street kid, by definition, is poor. You can't tell stories about poverty because stories require narrative. Poverty has no narrative. It is the crisis of having too little of everything every day. Your family eats cornmeal mush and mayonnaise sandwiches for weeks. Bills cannot be paid: The power goes out, the phone goes dead, the heater won't heat. Teeth rot. Shoes get threadbare. You wear light autumn clothes into the hard winter and you get sick and the doctor is not called and you almost die of fevers over 105 degrees. And it's very hard to sleep, and sometimes you wet the bed, and there are dark circles under your eyes, and you know too much.

All that happened to me before I was 14, and that's important only because that's the kind of thing that happens to all of us poor, so very many, then as now. (I'm not writing this in hopes that anyone will give a shit. Unhappily – and this is very street kid – I have no faith in anyone giving a shit.)

Hey, I lucked out. Amongst the voiceless, I get to tell of it.

The scariest thing for a poor kid isn't doing without. We're used to that; our lives are made of that. The scary deal is what poverty does to your mother, father, uncles, aunts – people you're supposed to depend on. Their daily bread is fear, so they're apt to go very, very crazy. See, it's one thing to be a kid and eat a mayonnaise sandwich for supper; it's quite another to be the mother who has to serve that sandwich. (No food stamps circa 1957.)

So we're at 1286 Decatur St., Brooklyn, N.Y. – a very different Brooklyn than today's – and Pa shows up looking snappy in good clothes, his Buick parked downstairs. He whines about how hard it is out there and slams his hand on the Formica table, shouting, "Here's five dollars, go on welfare." Then he tells us how much he loves us. The weird thing is, he did love us. I even think Ma loved him. And we four kids (I, the eldest), well, he was our father, we had no choice but to love him. A roomful of people who loved each other. Then he'd leave, "I love you" on his lips.

What's scariest to a street kid isn't the street – one way or another, you learn to handle the street. But your apartment is scarier than anything, because there, up close, you watch your grownups crack and diminish – your people, your blood. (I think of Bruce Springsteen's song "Independence Day," about his father: "They ain't gonna do to me / What I watched them do to you.")

My aunts and Pa's second wife were screamers and hitters. They let it all out in bellows, beating on us kids with wooden spoons and the occasional broomstick while cursing like G.I.s – letting go at the drop of a hat. It wasn't what you did, it was when you did it: They were so afraid all the time – and afraid of so many things – that your smallest misstep at the wrong moment could rain a beating down. I knew even then that they were hysterical with fear, knew without being able to say. (Knowing and not being able to say, or not even knowing you know: the hell of children.) But God knows those women loved us. They prayed for us, and worked for us, and cooked for us, and fought for us – fought teachers, fought cops, fought strangers on the street. And we loved those women. These were roomfuls of people who loved each other.

My mother didn't bellow and rarely hit, but her intensity could fry you with a stare. She had a different way of fighting. They called it "schizophrenia" in those days. They'd call it something else now, and they'd be just as wrong. "Nervous breakdown" was another term. Let's just say that suddenly she'd give herself permission to do and say the most fantastic things, expressing for her children a kind of apocalyptic love, and demanding heroism of us in no uncertain terms, incandescently telling her frightened kids: "Don't get on your knees to ANYBODY." (That lesson stuck.)

Then men who really did wear white coats would take her away for unspecific periods of time. Or she'd try suicide – she loved her children so much it drove her crazy, and we loved her so much it made us crazy. Love, love – everywhere you looked, all of us loved each other so much.

Aunt Anna told me, "My'kul" – that's how she pronounced my name – "leave it to God, leave it to God." But I couldn't. God is too careless.

My father and all but one uncle served in World War II. No one knew about post-traumatic stress disorder in those days.

Maybe that explains why when my cousin, a little girl, wouldn't eat her supper one night – the supper my uncle worked so hard to put on the table, worked so hard at such a shit job – he started shoving it down her throat, and when she puked it back into the bowl he made her eat her puke. And she ate her puke. I was on the other side of the table and, while watching that, I was expected to finish every bite on my plate. And I did. After all, it was food. Another roomful of people who loved one another.

In a Brooklyn that is no longer Brooklyn: 1393 Myrtle Ave., spring of 1959. Ma tried to suicide just a week after Pa's second wife tried to suicide. But what I remember more than all the screams and fights and injuries and illnesses is: Jack.

Jack's Delicatessen. In that time, before supermarkets took over, you went to Jack's or Sal's or Marty's and ran a tab. They knew the neighborhood families didn't always have money for food, so they ran a tab on your family and you paid when you could – but you "paid regular," or the system wouldn't work. Pa hadn't paid regular in a couple of months, but Jack kept our tab open. One night Pa parked his Buick around the corner from Jack's. (Note: In New York City, a car is not a necessity. It was for Pa. Food for his children – not his necessity.) He told me to go and get "the list," the grocery list. I'll take to my grave how Jack looked at me. Fierceness. Grief. He bagged the list, handed me the bag, and said in a tone the page cannot duplicate: "Tell your father, next time he's the one to come."

In that moment I understood my father. He wasn't my shield. I was his.

So much love amongst all these people. Apartments exploding with love. Buicks shining with love. (Hey: I loved my father's cars!)

There came a day. Spring of '59. I was 13. The radio played the Genies' "Who's That Knocking" and the Fleetwoods' "Come Softly to Me." I packed a small valise. I walked past my father and down the stairs. Hit the street. There was lots to be scared of out there, but I didn't feel a thing except the determination that never again would parents or kin have their say over my life. I would go my own way and make that stick (and I did).

It was so much better than being loved.