The awkwardness that exists between complete strangers

Dear Luv Doc,
My boyfriend never introduces me to people. Not at parties or work or at the grocery store or whatever. It drives me crazy, and is really embarrassing. Should I start wearing a name tag?
- A. Nobody

Yes, you should. You can’t expect him to just remember your name at the drop of a hat – although really, how often do people drop hats anymore? Other than Pharrell Williams, nobody even wears hats these days. Maybe it’s because people are afraid to look as ridiculous as Pharrell Williams. That’s a shame, because more hats would mean more hat dropping and people would be prepared for that shit. Imagine that in the future some dude walks by you and drops his fedora and you get all up in his face and scream, “I’m ready! Let’s do this, motherfucker! You think this is the first time someone has dropped a hat on me today??!?” I mean, there are still people who wear fedoras – Josh Groban for instance … or maybe a bassist from a Christian rock band who doesn’t quite know how to dress “rock & roll,” but by and large … holy shit ... what was I talking about here? Oh yeah … your boyfriend won’t introduce you. Let’s get back to that.

There are a couple of ways you can interpret his behavior. One is to assume that he holds you in such low regard that he doesn’t think you’re worthy of an introduction. If that is truly the case, why is he still your boyfriend? If you have that little self-esteem, I would probably be embarrassed to introduce you myself. The other possibility is that he was never taught to properly introduce people – that he is perfectly comfortable with the awkwardness that exists between complete strangers in close company – or perhaps that he feels such awkwardness is perfectly natural. In other words, he is totally lacking in social graces. That sounds harsh, but it is not at all that uncommon. I can’t tell you how often I spend long stretches in close company without being introduced. I’m not just talking about elevators or Capital Metro buses or the dining hall at Casa de Luz. I’m talking about cocktail parties with “friends.” I try not to take it personally.

Instead, I take the initiative and introduce myself. This has the dual benefit of making things less awkward for me and more awkward for the schmuck who forgot to introduce me. Quite satisfying, really. In fact, I am getting a warm feeling just telling you about it. More importantly however, it is a lesson in humility. The minute I start thinking I am someone who demands an introduction is the minute I become a person no one wants to meet. 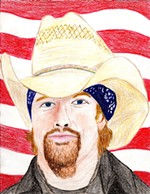