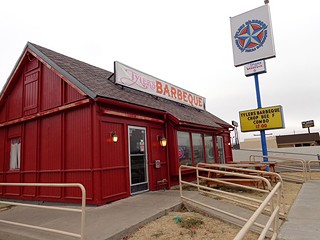 Tyler's Barbeque in Amarillo is the real deal. When you step through the doors of the former fast-food joint you're transported into a roadhouse barbecue restaurant that could be on any Texas back road. The working folks in this part of the country wouldn't accept an imitation.

The owner, Tyler Frazer, is nearly always at the cash register welcoming everyone like they are a long-lost childhood chum. Getting Tyler to talk about barbecue is like leading a calf to a cow. He's passionate about smoked meats and knowledgeable by experience. The Amarillo native once worked on the world's largest transportable smoker.

All smoked briskets are not equal, and Tyler's briskets are a little more equal than most. Even late on a Thursday afternoon, the meat was fresh from the smoker and tasty.

Thursdays are also the only day of the week that Tyler makes his special jalapeño mac and cheese. A cup of the creamy pasta is the perfect complement to a plate of brisket slices, but it's a lot to eat.

Tyler's Barbeque is on the west side of Amarillo at 2014 Paramount Blvd., just south of I-40 at the Paramount/Julian exit. Closed Sunday and Monday, Tyler's is open the rest of the week from 11am to 8pm. It's not unusual that they sell out by midafternoon, since they were identified as one of the Top 50 barbecue joints by Texas Monthly. Call ahead at 806/331-2271.