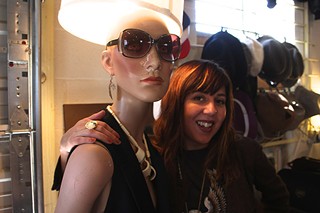 What makes a vintage store heaven on Earth? It depends on what you're looking for. Blue Velvet is a Seventies mecca; old Hollywood glamour lives at Big Bertha's Paradise and Amelia's Retro-Vogue. If you want a prairie dress for under a dollar and you have a week to dig for it, the Blue Hanger is for you. Got cash to burn and want to look like Nylon magazine? Feathers, baby. But, back in the day, there was one store on SoCo to rule them all and in the darkness bind them. I'm talking, of course, about New Bohemia. I could go on about the stuff I scored for cheap there when I worked nearby in 2003, but I don't want to go all weepy on you.

New Bohemia is still fantastic, but with most of the foot traffic coming from tourists these days – a trend that looms visibly in the shape of the South Congress hotel construction across the street, where food trucks once clustered – the store has gone higher-end. A rigorously curated and airily displayed collection is a pleasure to behold – witness Las Cruxes in Farewell Books. However, there's a particular kind of reckless joy to be found in the jumbled vintage boutiques of the SoCo of yesteryear, where you could dive into an overcrowded clothing rack with no idea what you were going to pull out, but with absolute certainty that it would be something good. 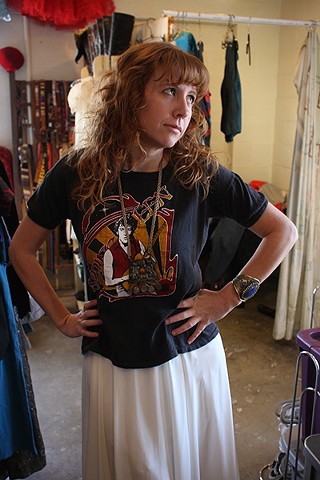 If you agree, it's time to put the Annex (1602 S. Congress), located in the alley right behind New Bohemia, in your rotation. Owner Stephanie Demopulos got her start working and consigning at New Bohemia a decade ago, right around the time I found a Coach leather messenger bag there for $14. (Sniff.) It was never Stephanie's dream to own her own store; the Houston native started thrifting in high school, and just never stopped. Soft-spoken and petite, she still looks a little bewildered when she talks about taking over the storage space tucked in the alley last October. "I just love the clothes," she confesses. "I like to mix it all up. I'll pick modern, all the way back to as old as I can find, and I just throw it all together."

Stumbling through the doorway into the Annex for the first time in the midst of SXSW madness gave me a feeling I can only describe as "Narnian." Bigger on the inside than the outside, it's a brightly colored toy box of a store, softly lit through the roll-up warehouse-style door and crammed to the last inch with treasures. Stephanie stocks trendy boho threads aplenty, but she has an eye for strong pieces with unusual cuts, and her finds have an unexpected feel even when they're on-trend. Whether it's a leather bag from the Seventies, a Twenties lawn slip, or that one Eighties peplum dress that actually looks like the Forties dress it was modeled after, she manages to find the best and most interesting version of everything.

When I decided to have a dress-up day at the Annex, I knew exactly who to call: funny lady Courtney Hopkin, who shares both my love of crazy vintage and my terminal shyness about wearing my finds. Courtney and I spend a lot of time G-chatting about things we own but never have the guts to wear, like my gold lurex maxi dress and the long patchwork vest she describes as "like the thing Princess Leia wears at the Ewok Ranch." (Full disclosure: Courtney performs in sketch troupe Your Terrific Neighbors with Curtis Luciani, who is my husband. Fuller disclosure: She has the prettiest, softest hair of anyone.)

Courtney and I spent a morning exploring the Annex's inventory, and after hours of satin Young Edwardian jumpsuits, Bruce Springsteen concert tees, jumble-printed Diane Freis sack dresses, and tapered Ralph Lauren trousers, we had barely touched the tip of the iceberg. There was laughter, there were tears, there was a studded denim jumpsuit. To witness Courtney's journey, visit the online photo gallery. Suffice it to say, I am one lime-green zebra-striped blanket coat the richer and a world of old Austin memories the better for my trip to the Annex. Excuse me, there's something in my eye.

Paw through the Annex's vintage finds in our related photo gallery. 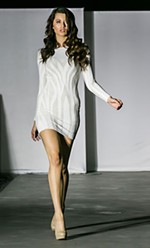 After a Fashion
Is this a turn of the page or an entire new chapter?