Maybe you're not cut out for monogamy 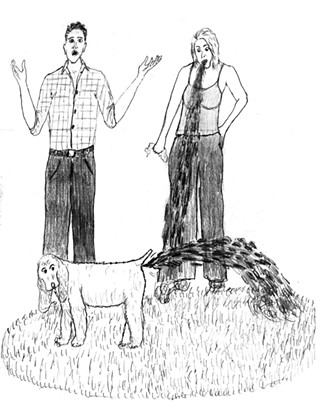 Dear Luv Doc,
I am continually filing through women like that guy files files in Being John Malkovich. Though unlike that guy, I seem unable to find the right file. I go from high to low with enough women to confuse my senses and leave me feeling drunk and empty at the end of the day, the night, and the week. How do I quit filing and just pick one?
Sincerely,
ATX and Doomed

Dear Doomed, maybe you’re not cut out for monogamy. That isn’t so bad, is it? Sure, there are a handful of benefits to monogamy, but it’s a lot of goddamned work. Nobody just hooks up with a fairy-tale princess and lives “happily ever after.” Fuck you, Walt Disney. The “happily ever after” part is where things start getting ugly. That’s why they don’t show it. A real monogamous relationship is sort of like the chain saw scene in Scarface: Brutal, long, and difficult to watch. Disney movies may lop off the chain saw scene, but rest assured, it’s in the original script.

What I am saying here is that if you’re hell-bent on having a monogamous relationship, you’re absolutely right to flip through a lot of files … or as the French say, “filles.” Trust me. You don’t want to have to clean your cocker spaniel’s projectile diarrhea out of your shag carpet with anyone who doesn’t have an iron stomach. You’ll be cleaning it twice. You also might want to rethink the shag carpet. Seriously, no matter how often you vacuum it and hit it with Febreze, shag carpet will eventually end up smelling worse than Oscar the Grouch’s taint.

Speaking of taint, good luck finding a woman who will let an 8.5 pound parasite ravage her vagina, split open her perineum, and drag out a bloody trail of innards without going certifiably insane. Yes, I am talking about childbirth – which makes the projectile dog diarrhea thing seem embarrassingly trivial. You are going to need a woman with a heroic amount of mental and physical fortitude – and ideally some adequately wide hips. That type of woman doesn’t just fall into your lap at Hooters – or even one of the more respectable titty bars. No, you’re going to have to suck it up and sample the whole smorgasbord … kick some tires – or at least motorboat some fun bags.

This dating thing is a process, true, but if you’re not a complete asshole, it can be a fun one. Try to just revel in all the possibilities. You might also want to let go of the notion that if you don’t find a soulmate, your life isn’t complete. Work on you and that other stuff will work itself out.