Letters at 3AM – Manifesto: A Radical Aesthetics

Get stuff out there; work with cause: That's the genesis of LettersAt3amPress 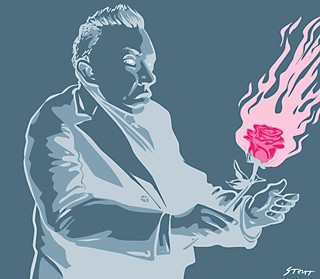 "Aesthetics" is a sloppy word for a hodgepodge concept, officially defined as: principles guiding artistic work. A radical aesthetic is something more: the crossroads at which your vision of beauty meets the way you actually live. In arithmetic's imagery: Your vision of beauty divided by the way you actually live equals your aesthetics – profess as you may to the contrary.

I sit in the night and say to myself, "Ventura, aren't you a tad old to be issuing manifestos? I mean, man, a radical aesthetics manifesto? 'Cause that's what it is, this thing you've got in mind, since every aesthetic implies something political, remember? Why not have a whiskey and go to bed?"

Why not have a whiskey and not go to bed? The thing is, I'm busy being haunted by Randolph Bourne – for, as John Dos Passos wrote, if any man has a ghost, Bourne has a ghost.

Bourne was a hunchbacked dwarf with long fingers who played Bach and wrote brilliant essays from 1911 to 1918, when he died of pneumonia and poverty at the age of 32. Bourne took for granted that every political stance implies an aesthetic and every aesthetic implies the political.

Of course, I know writers whose professed politics are nothing like the aesthetics implied by their work, and I know (of) politicians whose aesthetic preferences imply a wholly different politics than what (and whom) they work for. Not to mention the legions of bourgeois whose vision of beauty has so little to do with the way they actually live that the basic mechanism of their lives is a cover-up.

A writer can't do that. Writers must either be willfully oblivious to anything resembling a radical aesthetic or they must come to terms with how what they write relates to how they live. Writers have died or gone to pieces over the inability to do either.

The ghost of Randolph Bourne pushed me to the wall to remind me that my writing and my life must fit like clasped hands.

What's that look like on a basic level? Looks like this: I've always written with small words except where it's unavoidable, because I come from the working class and I want anyone with a sixth-grade reading level who picks up this paper to read me without bafflement over such a basic issue as vocabulary. If I'm to write about aesthetics I define the word, as I mean it, in the first paragraph. The point is to leave no one behind.

(There are people smarter than I, and probably smarter than you, who can hardly read. A democracy must never forget that.)

When John Cassavetes told his father that he wanted to become an actor, his father told him that he was taking on a great task, for in his roles he would be speaking for people who cannot speak for themselves.

Writers take on that great task. That's the core of my aesthetic.

Jazmin Aminian wrote something to me years ago that I copied and taped to my bedroom door: "It is the artist's task to walk beholden to beauty, to be responsible to freedom."

That's about half of my aesthetic.

The other half I saw voiced when I stepped into the studio of the late Steve Teeters, a brilliant madman sculptor/metalworker/glassblower/artist who fucking died in January. It was written on a sticker he handed me after the first time he shook my hand:

So into this apartment steps the ghost of Randolph Bourne, speaking from a century ago:

"One keeps healthy in wartime not by a series of religious and political consolations that something good is coming out of it all, but by a vigorous assertion of values in which war has no part."

In our America – the America that is no longer America – wartime is all the time, and our shooting wars are the least of it. There are bigger, uglier, and more permanent wars now: wars against the Constitution, against democracy, against education, against knowledge, against tolerance, against inclusion, against kindness, against mercy, against forgiveness, against originality, against the republic, against beauty itself – and I'm not pointing only at the crazy, whiny right, I'm also pointing at the timid, whiny middle and the blinkered, whiny left, plus both parties in Congress, every damned boardroom, and the White House – oh, yes, the White House. Total war, 21st century style. That's the wartime I hear in Bourne's sentence.

And then Bourne harpoons Moby-Dick:

"Now, while everything that is respectable in America seems to be putting its effort, with a sort of joyful perversity, into the technique of destruction, are there no desperate spiritual outlaws with a lust to create?"

Which brings to the surface the most basic question: What is my responsibility? (In a democracy, that is the basic question for any citizen.)

I'm a writer. One of my responsibilities is a responsibility to my medium – a medium that's in tons of trouble, for the old-time publishing houses have merged into Hollywood-like publishing studios, geared to mass enthusiasms and short-term profits. Editors and agents who serve these studios are of a type: They are too alike, their collective experience is too narrow, and they are too in the thrall of money to foster a vibrant literature.

What might a vibrant literature look like? A literature that sees itself as an adventure in beauty and thought, voiced by storytellers, poets, and thinkers who stake their lives on their visions. A literature that misbehaves and can't be trusted to toe the line of any worldview or doctrine. Above all, a literature that can speak across class.

If Randolph Bourne was to stop haunting me I needed to do, do, do something. It's not enough to get mad. As for irony, resignation, bitterness, complacency – they're just hideouts. The question became: What's doable?

I don't have the chops to be an organizer or a businessman. But online publishing is a revolution in my medium. Jazmin Aminian and I investigated. It's not cheap, but, if you're careful, it's not prohibitive. So what about a press? An imprint, as they used to call it. A press that's about writers publishing writers – such that, with Internet links, anyone who looks for one of us finds all of us and learns that a book published with us is a book that is believed in. A press. An imprint. Online and print-on-demand. Get stuff out there. Just get it out there. Remember the Zen guy who instructed thusly: "Work with cause, and leave effect to the great laws of the universe."

Get stuff out there. Work with cause.

As an anonymous Bronx rapper bopped on the street one night: "Ain't nuthin' to it but to do it."

The writers we thought of first were Austin legend James BigBoy Medlin, Karen Holden, and Jo Carol Pierce. Then Guy Juke and Mark Fairfield showed up. And my stuff, too, but we thought of me last – cross my heart and spit, I never thought of publishing my stuff until Big's classic question asserted itself: "Why not?"

LettersAt3amPress came into being in just that way. Aesthetics and politics clasping hands. Stop whining about how all the great imprints have gone Hollywood, and get stuff out there.

David Eric "Duke" Rosenthal taught me long ago that there was an 11th Commandment, but Jehovah thought it so obvious He didn't need to write it in stone: Thou shalt not be a wimp.

Get stuff out there. That's what I could take responsibility for.

Big's Slap Noir is available now on Kobo, Kindle, Nook, and iBook, plus print-on-demand. No book could live the manifesto of LettersAt3amPress better than Big's. His participation set this imprint in motion.

Get stuff out there. Thou shalt not be a wimp. Be a responsible citizen of the republic that no longer exists.