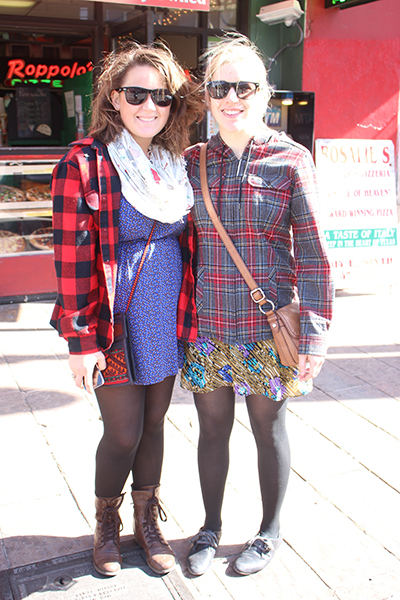 Let it never be said that plaid has no place in Austin style, especially when thrown over playful prints in spring-appropriate colors.

Walking down Congress Avenue over the weekend, you could hear people saying in 30 different languages, "What the eff is going on with the weather?" It may not be Winnipeg out there, but March in Austin is supposed to be wall-to-wall shorts and sundresses. With SXSW Interactive and Film drenched in chilly drizzle, the weekend was awash in ponchos, and local boutiques experienced a rush on wellies. The only positive thing about Austin's failure to preen for guests is that maybe a few thousand less people will decide to move here based on their SXSW experience. (We love y'all. Keep tipping! But seriously, don't move here.)

Of course, Interactive is never exactly a style parade, and while the Film Fest brought out a few snappily dressed celebs and the unearthly, immaculate Tilda Swinton, civilian film fans mostly wore shades of plaid: Western shirts for the natives, flannel for the carpetbaggers, and, for the most daring, the occasional contrasting piping or paisley yoke.

Wednesday brought Interactive to a close just in time for the Music Fest and the sunshine to make a joint appearance. Temperatures stayed low, but there was a marked uptick in creative ways of keeping warm. Layers abounded, as did wraps, scarves, and jackets of every description. I wore a denim jacket that was actually mine in the Nineties (or, depending on whom you ask, my sister's). Check out what SXSW wore.