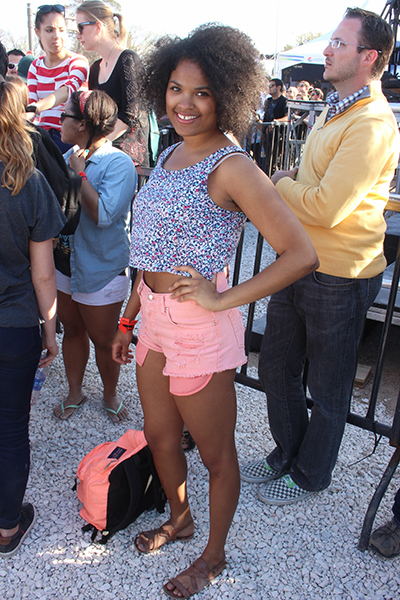 At the SXSW mtvU Woodies Festival, put on by MTV's college channel, rapper Vic Mensa, Bleachers (a side project of Fun's Jack Antonoff), and other buzzy acts presided over an atmosphere that can only be described as spring break at its spring breakiest. Any hint of a scholarly theme implied by a lineup including both London Grammar and American Authors was purely coincidental; as the TV cameras floated over the crowd, the only thing college kids in the audience studied was their Instagram feeds, where the hashtag #woodies could earn them a priceless mtvU hoodie.

Logos aside, the best thing about college student style is sheer exuberance. Back in my college years, I tried on a new persona for every party: sexy vampire, patchwork hippie, extra from Sanford and Son. Ooh, look at me, I'm so ladylike in my pencil skirt! Now I'm hennaing my hair – so risqué! During my cornrow month, I remember a dreadlocked classmate looking at my waist-length braids, shaking his head and tsking, "You're not committed to your alternative lifestyle." It was true, thank God.

So who cares if the style at the mtvU Woodies was mostly disposable, trendy, and straight out of the Forever 21 playbook? Feather earrings and daisy-print pants, florals and cut-offs, and everything either see-through or neon – the vivid, pop art mix of 1969 and 1996 fashions looked perfect in the dusty breeze, and so did the rainbow-haired revelers, brandishing Shiner cans and getting down to Iggy Azalea's "Fancy" blaring over the speakers in between the sets.

The real Iggy Azalea wouldn't come out until the awards show later – along with Charli XCX, Childish Gambino, and surprise guest Lil Wayne – but as the shadows lengthened, I began thinking romantic thoughts about my sofa, TV, and cats. As I hovered near the exit pondering whether to try to make #to;ds happen ("too old; didn't stay"), a fresh-faced youngster bounded up to me and asked if I was going to use my remaining beer tickets. After grilling him sternly on his plans for getting home at the end of the night and insisting that he take my extra food tickets as well, I acquiesced.

"Are you a journalist?" he asked, staring at my badge as if it were actually made of platinum instead of just having the word "platinum" on it. "That's soooo cool."

Oh, the innocence of youth.