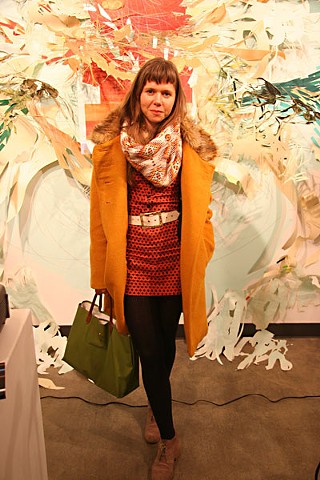 Austin Review Editor Tatiana Ryckman mixes patterns like a pro. She says everything is thrift or bargain except the coat, a gift from her mom. Can she be my mom, too? (Photo by Amy Gentry)

What's more optimistic in this day and age than a celebration of print? The answer, friends, is a celebration of print in the midst of February – especially a February that is so shockingly February-ish. Print, whether in the form of words on a page or rosebuds on a cotton dress, handprints in wet concrete or fingerprints on a cocktail glass, is our human imprimatur on an anonymous world, our way of announcing, "We were here."

And here we were, despite the chill in the air, at the Big Medium gallery Feb. 11, huddled amid accordions and cascades of printed paper, beneath framed prints of every description, to experience an Austin-only sneak preview of indie press A Strange Object's second release, the short-story collection Misadventure by Nicholas Grider. Fanned attractively on the table, Grider's debut mirrored the design aesthetic as well as the ethos of the PrintAustin 2014 exhibit that graced the walls.

Spring dresses in cheerful prints offered a welcome extension of the theme, and A Strange Object (ASO) co-directors Callie Collins and Jill Meyers sported them bravely, albeit over opaque tights with boots and cardigans. For those of us accustomed to celebrating Valentine's Day in halter tops, it might as well have been an evening in Sochi – which accounted, perhaps, for the open vodka bar. I am told that in Russia, shots of vodka are sold on street corners in plastic cups with foil pull-tabs, like Jell-O. Let's hope the polar vortex doesn't last long enough for Dripping Springs Vodka trailers to start popping up on SoCo.

It's true that literary types value comfort. One rather casual gentleman I spoke to claimed to have been wearing the same hoodie since New Year's Day. And not the Lunar New Year, either – regular old (auld?) run-through-the-streets-of-Manhattan-to-proclaim-your-love-to-Meg-Ryan Jan. 1. In his defense, it was a nice, thick, American-made hoodie. I purchased my favorite sweatshirt at the Family Dollar and only wear it at home, when I'm receiving guests or having long conversations with my cats.

Alas, as is so often the case in Austin, the most nattily dressed man there was a gate-crasher. But after all, there was plenty of pretty on the walls – and in the satchels and souls of the writers present.

Which brings me to Misadventure itself. Dark and playful and a little bit sexy, it follows a bevy of gay and straight characters through experiences alternately alienating and titillating – kaleidoscopic couplings, bondage scenarios gone awry, and lonely nights spent waiting for one's husband to return with inexplicable bloodstains on his collar. We've all been there.

The launch party climaxed with a "collective reading" of one of the more experimental stories, "Millions of Americans Are Strange." A sly wink at Gertrude Stein's masterpiece The Making of Americans, Grider's story bests Ms. Stein's by being a hundredth as long, using complete sentences, and containing more sex. As a procession of print worshippers paraded past the microphone in single-file, breathing life into print one melancholy sentence at a time, it was hard not to feel like one of the millions of characters referenced in the story.

My sentence was, "Derek is an alcoholic whose favorite cover song is Jeff Buckley's cover of Leonard Cohen's 'Hallelujah,' and when he gets drunk he sometimes asks Kelly to tie him to a kitchen chair and break his phone and cut his hair." Let's just say there's a lot more chair-tying in Misadventure, but it would be a betrayal if I didn't urge you to see it in glorious black-and-white print.

See a gallery of book launch party shots at austinchronicle.com/photos. 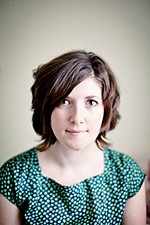