To tell or not to tell? 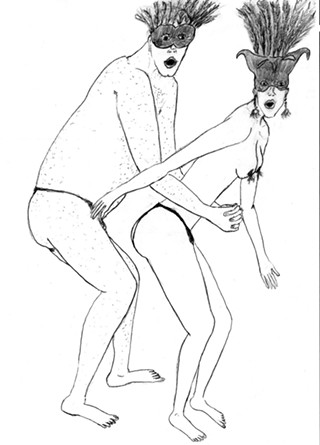 Dear Luv Doc,
I was at Carnaval on Saturday and I saw my ex-boyfriend humping on a sweaty, half-naked woman who wasn’t his wife (he has been married three years). I don’t know his wife very well, but I feel like she should know that he may be cheating on her like he did on me with her. Should I tell her or let sleeping dogs hump?
- Catcher

OK, Catcher, if I am making a list of the last people on Earth who should drop that bomb, you’re at the top of it. Toronto Mayor Rob Ford comes in a close second, but you’re in the No. 1 spot with a bullet. No matter what you say, it’s just going to sound like you’re a vindictive ex, hell-bent on splitting them up - not to mention the fact that the “bomb” may not be a bomb at all. I haven’t been to Carnaval myself, but judging by the photos I have seen and the stories I have heard, it’s nearly impossible not to hump a sweaty, half-naked woman at Carnaval. In fact, I am pretty sure that might be the main activity (other than wearing skimpy, feathered costumes and looking at your feet when you dance.)

Further complicating issues is the fact that you were there with him, maybe not in the biblical sense, but very likely out there getting down with all of the other sweaty sambistas. You were in the shit. You know it gets crazy when they start playing that South American devil music (it has horns). Feathers everywhere … wardrobe malfunctions … people making Charo noises. The whole place is just one errant feather tickle away from becoming a huge, semen splattered Jackson Pollock painting. So you can see, pointing a righteous finger of condemnation out of that sea of iniquity is tricky business for even the saintliest of sinners.

Lastly, how do you know he didn’t have the full blessing of his wife to get his freak on? If he truly is sneaking around on her, he picked a really public place to do it – even if he was wearing an Eyes Wide Shut mask and exceptionally ugly Anthony Kiedis Superbowl meggings (you know, to attract attention away from his face). After all, you recognized him, didn’t you? So, my advice? Never wake a sleeping dog unless you are prepared to get bit.