Am I wrong to assume? 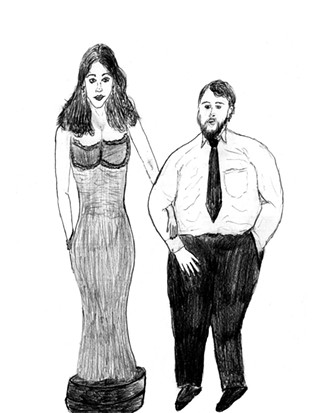 Dear Luv Doc,
In this day and age, when women argue their case to be accepted to be equal to men and their riches, am I wrong to assume that trophy wives who sit in the stands or sidelines and end up kissing the man who makes the dough, the same women who complain about how the male race treats women like sh*t? Or, is this just a way of life the dude chooses? Go shop with your own damn money, b*itch!
Sincerely,
Make your own damn money

Just … uh … wow. There is so much low-hanging fruit in the paragraph above I am afraid I won’t do it all justice, but let’s start at the beginning: You didn’t finish your question. Are you wrong to assume what? Don’t answer that, Money. I got this. Yes, you are wrong to assume. You remember that ass/u/me thing? Live it.

Let’s tick a few other things off the list while we’re at it. There is no male race. Males are of all races – OK, maybe not Amazonian. In its adjectival usage, the word “male” refers to gender. I know you’re probably thinking I’m being an asshole right now, but just consider that a little linguistic reach-around. You’re welcome.

When you insert an asterisk into the word “bitch” and leave in the “i,” you really haven’t softened the term in any way for people who might be offended by seeing the unadulterated original. In fact, I would argue that replacing a crucial vowel with an asterisk in a potentially offensive word is a completely useless and smug gesture in that it assumes the reader is too much of a sh*t-eating, knuckle-dragging f*cktard to recognize the clever substitution. You feel me? Again with the assumptions.

Lastly, the fact that trophy wives exist in no way negates or undermines the legitimate argument that historically, women have been and continue to be subjugated and discriminated against. In fact, it actually illustrates the point. Subjugated people learn, if nothing else, how to game their oppressors.

I know you have a real question in you, Money. It’s fighting to get out. Try one of these: Why am I so frustrated by trophy wives? Do I want a trophy wife myself? Why do I feel that being a trophy wife isn’t the same as being treated like shit? Take a few years. Get back with me.