Letters at 3AM: 3% Neanderthal

Our DNA has seen it all before – and survived 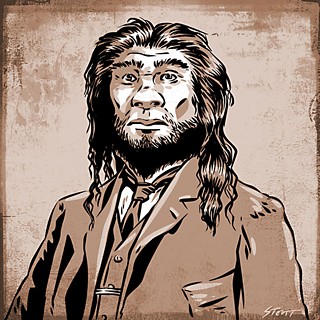 That's me: 3% of my DNA is Neanderthal. Higher than the norm for Eurasian descendants. Wikipedia quips that having "as much as 1-4% ... [is] roughly equivalent to having one Neanderthal great-great-great-grandparent."

And then there's the species not discovered until 2008: Denisovan.

Why does my ego find this so satisfying?

It all began a year ago, when I received a gift that was also kind of a dare: a kit called "Geno 2.0," whereby I'd submit my DNA for analysis by National Geographic's Genographic Project, whereupon, according to their website, they would "then run a comprehensive analysis to identify thousands of genetic markers" on my maternal and paternal DNA, and reveal my "direct ... deep ancestry." Also, according to the information packet, they'd "analyze a collection of more than 130,000 other ancestry-informative markers from across your entire genome to reveal the regional affiliations of your ancestry. ... You will discover the migration paths your ancient ancestors followed thousands of years ago ... your branches on the human family tree."

Assurances of privacy aside, today you must assume that if you give your DNA to anybody you're giving it to everybody. I considered that for about five seconds and decided I didn't care.

And thereby hangs a tale – especially if you believe, like Doctor Who, that "soul is made of stories."

Geno 2.0 informed me, with some enthusiasm, that "the common direct maternal ancestor to all women alive today was born in East Africa about 180,000 years ago." If she's our mama's ancestor then she is mine, this ancient Ethiopian – which is why a character in Steve Erickson's These Dreams of You insists, "'We are all Ethiopians.'"

Hit pause: Our first grandma lived 180,000 years ago. That's roughly 165,000 years before the beginnings of what we generously call "civilization." Specks of our DNA, mine and yours, chipped in on every tribal powwow, every decision to migrate, every side of every conflict, until right now. That same DNA sits haughtily with the board of directors on the top floor while, in the basement, it also dutifully hauls out the trash.

I marvel: 165,000 years, give or take, when my DNA contributed to all kinds of things and we know next to nothing about the folks that hauled this DNA from then to now – how they communicated, what stories they told, what dances they danced, what songs they sung.

But it cheers me up, it really does, to realize how well and how long they persevered and thrived without benefit of what we call civilization. Given that our present civilization, especially its American version, is, at this very moment, collapsing/changing/transforming (take your pick), and falling apart in the process, hey – this DNA is some sturdy shit. And it's seen climate change before.

So I followed the story of my grandmas and grandpas: About 67,000 years ago, they left Africa, doing whatever they did in what is now Egypt, Saudi Arabia, Palestine, and Israel. One or more of my grandmas probably mooked with my Neanderthal grandpas in the vicinity of Israel's Mount Carmel, where Neanderthal remains date back 60,000 years.

Fifty thousand years ago, grandma was in western Asia, in places we now call Turkey and Georgia; 25,000 years ago, she was on the northwest shore of the Caspian Sea in what is now southern Russia and Kazakhstan. She may have been one of those innovative souls who invented farming in those parts around that time. Circa 19,000 years ago, I had grandmas in Croatia, Greece, Belgium, Denmark, Wales – to name a few. Our collective grandma got around.

Meanwhile, my first grandpa was in one of the "earlier groups" to leave Africa and 50,000 years ago was hunting "great herds" of game in what is now Iran. Thirty thousand years ago, as near as I can make out from the Geno 2.0 map, grandpa was in the general area of Tajikistan, western China, and northern Afghanistan and Pakistan. Starting about 11,000 years ago, my grandpas headed west, some settling in northern Europe, some making their way to the British Isles, and some to what is now France, Spain, and Portugal.

My general DNA comes out to this: 55% Mediterranean, "found at highest frequencies in Southern Europe and the Levant – people from Sardinia, Italy, Greece, Lebanon, Egypt and Tunisia"; 21% Northern European, with relatives, so to speak, in the UK, Denmark, Finland, Russia, and Germany; and 21% is what Geno 2.0 calls Southwest Asian – where I share specific DNA markers with the populaces of India, Tajikistan, and Iran.

Then there's that 3% Neanderthal and 3.3% Denisovan, whereby hangs a further tale, as reported in The New York Times, Dec. 4, 2013: "In a paper in the journal Nature, scientists reported ... that they had retrieved ancient human DNA from a fossil [found in Spain] dating back about 400,000 years, shattering the previous record of 100,000 years." David Reich, "a geneticist at Harvard Medical School who was not involved in the research," said: "'That's an amazing, game-changing thing.'"

Then the Times drops this one on, in effect, Geno 2.0: "The new finding is hard to reconcile with the picture of human evolution that has been emerging based on fossils and ancient DNA." Paleoanthropologist Dr. Juan Luis Arsuaga: "'Now we have to rethink the whole story.'"

Turns out the story is far older than we thought – especially for those of us (and we are many) walking around with Neanderthal and Denisovan DNA.

A million years ago.

Yeah, we've got DNA that has seen it all before – seen it all, and survived.

The Australian report quoted Alan Cooper, of the Australian Centre for Ancient DNA at the University of Adelaide, who "says the study 'completely rewrites what we know about human evolutionary history.'"

I love that about science – and about scientists. One day they speak with great authority on what and how and why, and the next day somebody finds a bone in a cave and they need a complete rewrite.

According to Dr. Cooper, "'When you try and reconstruct evolutionary history by looking at modern genetic data you get it completely wrong.'" He adds: "'Five years ago we didn't even know of the existence of the Denisovans.'"

Cooper is interested in identifying "'what bits of Neanderthal and Denisovan DNA survive in us and what they might be doing.'"

What's my Neanderthal stuff doing? What's my Denisovan stuff up to?

It is likely that Geno 2.0's analysis of our fairly recent 70,000-year history is broadly dependable and that the vast majority of Americans has DNA on an all sides and amongst all factions of every issue and conflict just about everywhere. I share lots of DNA with Siberians, Egyptians, Georgians, Germans, and Greeks; a little with Amerindians; a very little with Highland Peruvians; none with the Chinese – except for our common grandmother and our Neanderthal and Denisovan DNA, which, from what I gather, appear to be spread pretty evenly.

Given the troubles we get into and the glories we share, it's no news really: We are each other.