The Luv Doc: Are Texans Too Nice?

Sometimes you have to be the change you seek 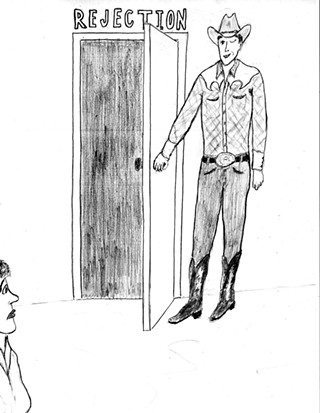 Dear Luv Doc,
I'm fairly new in town, and I've got a question for you about Texan dudes, because I'll be honest, I don't know much about 'em. I'm certainly not a player hater. I like to do my own share of playing the field, and admittedly, I am largely a commitment-phobe and am not looking for anything remotely serious. However, in my limited experiences with Texan men so far, they don't seem to be very upfront or straightforward about things. For example, they'll agree to meet up, then just pull a slow fade, instead of just politely saying no. (Dude, homegirl can handle the rejection, I just don't get why Texas guys have to be so "nice" about it. In the end it's way douchier.) Or they'll talk about their feelings whilst hooking up and get all sweet on you, and the next day, or several days later, you finally get the picture that it was just a hookup and they actually don't give a shit about you, friend or otherwise. Instead of calling it what it is, they feel the need to fabricate feelings and say shit they don't mean. I guess guys can be like that anywhere, but I've never found guys so insincere in all the land. Texan guys are too "nice". Any advice for an old gal who's just trying to tell it like it is in the saddle?
-Argosy

Let me be straightforward with you, Argosy: If “homegirl can handle the rejection,” then she can surely handle rejection in all of its forms. You seem to be taking issue with the method of rejection instead of rejection itself. Essentially you’re saying that you want these guys to stop pussyfooting around. You want them to tell you to fuck off right after they’re through banging you instead of letting you down easy with a gently tapering stream of maddeningly non-committal emails and texts. If only life were that easy. What makes you so special, Argosy? What makes you think you deserve the honesty and sincerity that is denied everyone else in order to spare their feelings?

You’re right Argosy, Texan men, by and large, are nice - even when they are being complete assholes. It’s a cultural thing. Get used to it. Or, better yet, be the change you seek by training them to be honest and open about their feelings by being (as I’m sure you are) honest and open about yours. Let them know right up front that you’re a commitment-phobe who likes to play the field and that when you’re tired of hitting it, you’re not shy about quitting it. I feel confident that if you do that, they’ll get the message.