Letters at 3AM: He Took the Cat to Texas 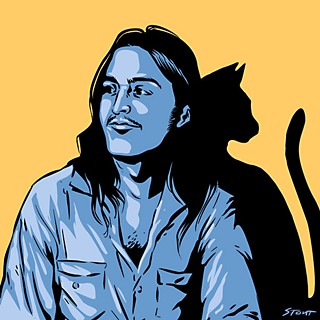 Mayer couldn't kill himself until he took the cat to Texas.

That is the final story in the many-storied life of Mayer Vishner.

"Jewish leprechaun," I thought at first sight of him. He was 35 then, slight of build, long dark hair, sharp-eyed – indefinably pixielike, looking slightly, or more than slightly, dangerous. He could and would recite any number of your flaws and mistakes, and be right, and make you like it. Tenderly generous. Bitchily stingy. Finicky, touchy, cranky, willful (very much like the cat he took to Texas). Vengeful, when vengeance was feasible. Funny, very funny, even at the end. Not a mystic bone in him and pointedly rude to anything spiritual or religious. An activist to the core, he created a socially responsible nuance in anything he did. As a passionate pacifist, he never gave up the cause. As a proud hedonist, he championed drugs, rock & roll, and sex (in that order). He had a beautiful gift for friendship, but relationships were, to his agony, beyond his capacities. As a newspaperman, his passion for clarity and accuracy remain unexcelled in my experience.

Newspaperman was only one of Mayer's disguises. New Yorker was another – he denied cultural validity to what was not New York. WBAI radio host. Award-winning New York magazine fact-checker. Co-founder of the Yippies, alongside Abbie Hoffman. Conceived and edited 1971's When the Mode of the Music Changes: An Anthology of Rock'n'Roll Lyrics – one of the first books to treat rock seriously. (The title is from Plato: "When the mode of the music changes, the walls of the city shake." Not bad for a Bronx kid who didn't go to college.) Columnist. Stand-up comic. Bookstore clerk (his final job). During the Sixties' peace movement he advocated and organized; his cause went down in flames with the re-election of Richard Nixon as Mayer watched the coverage sitting on Jerry Rubin's water bed with Yoko Ono and John Lennon.

At 16, he proudly won the 1965 Soil Conservation Essay Contest of the New York State Grange. He spoke of that on the last day of his life. A devoted gardener, for decades he cultivated organic garlic in a Greenwich Village plot that some of his ashes now fertilize.

He was almost granted the official stamp of having really lived: a New York Times obituary. The Times obituary staff discussed the possibility, but decided that Mayer Vishner wasn't important enough – a conclusion he would have resented and agreed with.

I met Mayer in 1984, when he became managing editor of LA Weekly. Back then, Mayer looked like a man who could do as he pleased – but only because Mayer was hard to read and because I couldn't accept, back then, that some people don't have any chance: Their damage is too deep and too ultimately inexplicable to escape, outwit, or transcend.

At LA Weekly, Mayer took a dangerously dysfunctional refugee camp of an organization and taught it how to be a newspaper. You wouldn't think a man whose inner life was as disheveled as Mayer's could teach professionalism to the mishap-prone misfits that inhabited (rather than worked at) our paper. He couldn't make us any less crazy, but we became newspaper people and we liked what we became. Mayer did that.

He loved some of us and we loved and/or respected him. You'd think that would be something to build a life on, but we were a proudly self-destructive bunch, Mayer most of all. He was (like me) a so-called "high-functioning" drunk – for a while. But after about a year, I'd hear horror stories of staffers dispatched to Mayer's apartment to see if he was alive; they'd find him in a mush of his excrement, passed out blind drunk on his bed.

That was bad. What was worse was that Mayer kind of bragged about it, as though passing out in his own slop gave him some special power – which, in his final years, he claimed outright. Only once, but he did state that to me.

When he left L.A., he left quietly. If there was a going-away party, I didn't hear about it. So far as I know, LA Weekly was the last time Mayer employed the full range of his capacities.

We lost touch for 20 years. Then, about five years ago, I got a call from LA Weekly veteran Ginger Varney: Mayer Vishner was looking for me.

So Lubbock, Texas, called MacDougal Street, Greenwich Village. We'd distanced ourselves toward the end of his LA Weekly days, but at the sound of each other's voices we were as close as we'd been when we were close.

He needed money. I gave what I could when I could. But that's not why he sought me. He needed accompaniment for one last mission as an activist: to exercise his unalienable right to end his life – with no interference by the authorities; with dignity, if possible; alone, but accompanied by the understanding of the few good friends he had left.

Mayer called it "my existential project."

Mayer believed that existential suffering can be as painful as physical suffering – and, sometimes, as incurable.

Years of therapy had been useless. Psychotropic medication hadn't made a dent. There'd been many hospitalizations. He insisted he wasn't an alcoholic, but drank five 40-ounce bottles of beer a day, plus vodka, plus pot. His memory was going. In chronically poor health, he was terrified of helplessness – a state that realistically might be just around the corner.

His family had paid his rent for many years and saved him from the street. In return, Mayer expressed fondness for his late father, indifference toward his siblings, and an alarming, raving hatred for his late mother. I never asked why and he never said, but, in his way, he made a statement, for among the odd complications of Mayer's last months was a $50,000 windfall, most of which he donated to Amnesty International, earmarked for Palestinians. "I want the Jews in my life to know that my last substantive act was generosity to the Palestinians – to apologize on behalf of the people I grew up with."

All that remained was to arrange for the cat – Adrienne, 12 years old, a gorgeous tortoiseshell. No New York friend could take her. She was terrified of the street. Mayer couldn't bear to leave her to die confused at the ASPCA.

I heard myself say, "I'll take the cat. Get her to Texas, and I'll take her." (A 78-year-old woman who knows Mayer's story has decided that "taking the cat to Texas" is "the perfect new term for the end-of-life choice.")

So, a month ago, there's Mayer at my door – a pot-bellied pixie, unsteady of hand, uncertain of step, balding, missing many teeth, unspecifically but definitely ill, with something now a bit sinister in his gaze, but still Mayer, grinning with mischief, saying not "Hello, old friend" but "I brought a cat."

Three nights later he was back in Greenwich Village. And dead.

"I've got places to not go and people to not see. I'm moving on."

As I said earlier, what was missing in Mayer Vishner was Mayer Vishner, an absent self. He wrote a poem around the time we got back in touch. He sent me the typescript. Sometimes, on the phone, he'd suddenly say, "You have the poem?" "I'm looking at it right now, it's taped to a bookcase."

"i light this candle for someone i am missing/a piece of me departed to heaven or hell,/dust or los angeles/a lover irreconcilably differing,/we were unable to reach each other's grasp/a grandparent i carry in my ways and genes,/tho never met/a comrade ally co-conspirator fallen,underground,/moved over or moved on to something else/a face i hardly knew in passing now passed/an inspiration of some sort pictured, heard/for a moment/again in the flicker of this small flame"

Endnote: Justin Schein has been filming a documentary about Mayer. The night before he ended his life, Mayer smiled with his eyes and said, a little like a kid, "Part of me really wants to see the movie." 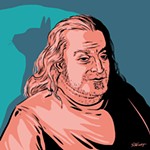 He Took the Cat to Texas: Part 2
Suicide was the last lens through which Mayer Vishner gazed upon life