Letters at 3AM: The Curious Case of the Missing Quotation

Jimmy Carter says the U.S. has no functioning democracy at present, and the press goes silent 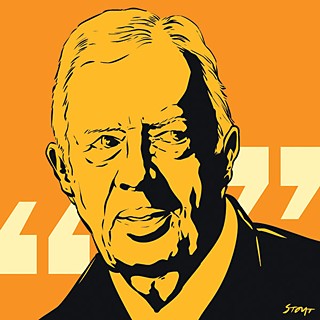 Four versions of one quotation:

"America no longer has a functioning democracy."

"America has no functioning democracy."

"America does not have a functioning democracy at this point in time."

"America does not at the moment have a functioning democracy."

Former President Jimmy Carter expressed that judgment on the night of July 16 at a German-U.S. nonprofit called Atlantik-Brücke (Atlantic Bridge) in Atlanta, Ga. Der Spiegel translated Carter's statement into German for the German edition of its website. (Der Spiegel has an English website, but didn't run the Carter story there.) The four versions were later translated from the German back into English.

As far as I can discover, the earliest American outlet to notice was The Daily Caller. On July 17, it posted the first of the versions as a headline and quoted the second in the story that followed, noting that Carter "mused whether the standards the Carter Center applies to foreign elections could be fulfilled by U.S. elections."

The third and fourth translations are identical in meaning. The third was posted by The Huffington Post on July 18 at 11am, and a slight variation was posted by United Press International at 1:31pm; Salon posted the fourth that day at 4:03pm, confirming the quote with Der Spiegel's Washington correspondent Gregor Peter Schmitz, who "said on Twitter he was present at the event."

Jimmy Carter is both a former U.S. president and a man with a deserved reputation for integrity. You'd think a man like that saying a thing like that would be some kind of news. You'd think the major news outlets would be at least interested to get confirmation and an elaboration from Jimmy Carter.

Silence – or its journalistic equivalent – reigned.

On July 18, msnNOW briefly quoted UPI, but there was no follow-up. On July 19, The Atlanta-Journal Constitution posted a tiny mention, also quoting UPI, and FoxNews.com stated that "his party controls the presidency and one of the two chambers of Congress, but for former President Jimmy Carter – quote – 'America has no functioning democracy.'"

As of mid-August, I found not a word of reportage or comment about the Carter statement in The New York Times, The Washington Post, The Washington Times, The Boston Globe, The Miami Herald, The Chicago Tribune, The Los Angeles Times, or the Associated Press, and nothing on the news websites of CBS, NBC, ABC, or CNN.

The story did start showing up on blogs and sites such as PressTV, rt.com, Drudge, The Christian Post, Forbes.com – but again, accounts were brief and mostly without comment.

Matt Damon heard about it: "Jimmy Carter came out and said we don't live in a democracy. That's, that's a little, that's a little intense when an ex-president says that" (The Huffington Post, Aug. 9).

The only print op-ed I found appeared in The Bangor Daily News, Bangor, Maine, where Peter Taber wondered why mainstream U.S. media ignored Carter's statement: "It takes a German news magazine ... to tell me that one of our four living ex-presidents – the only one of them doing anything honorable and useful in his post-presidential life – [believes? says?] that my country is going to hell" (July 31, verb omitted in the original).

As for what Carter said: Gerrymandering and the dandified bribery we call "lobbying" have rigged state legislatures coast to coast, frozen the House of Representatives into a configuration that bears no resemblance to the will of the American people, and given us a Senate of millionaires. We take for granted that no one can viably run for national office without corporate and 1% backing. These are not temporary aberrations; during the last three decades, these interlocking syndromes have become business as usual in American elections.

Every half-awake journalist knows this is so. Taken together, these dominant syndromes mean that small-r republicanism has collapsed in the United States, or, to put it Jimmy Carter's way: "America does not have a functioning democracy at this point in time."

To deal with Carter's statement as a responsible journalist, you must pose the question outright: "At this time, is the United States a functioning democracy?"

Most journalists know the facts that lead to the accurate answer, but they don't want to go there. "Denial" means to know and not know at the same time, and to choose not to know as one's default option; and that is the state of American political journalists today, on the left, the right, and in between.

Instead, they write and speak of American politics as though what has accumulatively happened during the last 30-odd years has not really, really happened – even when the person who brings up the issue is in a unique position to know, being a former occupant of the Oval Office.

That is why virtually the entire profession of journalism passed on Jimmy Carter's quotation. Journalists dread that, if they take Carter's issue seriously, then, inevitably and inexorably, the underlying assumptions and the very language of their reportage must change. They would rather stick to fiction – the fiction that what has happened has not really, really happened.

In fairness, that's what most of their readers, listeners, and viewers want: Stick to fiction, and get on with your day, albeit nervously.

If you wish for a greater and more important example of journalism hiding under the bed, consider the election of 2012:

But endorsement after endorsement failed to mention the Constitution as an issue. Not liberals like Nicholas D. Kristof in The New York Times (Sept. 6, 2012), or mainstreamers like The Economist's editorial board (Sept. 1, 2012). I looked high and low for the Constitution in 2012 election endorsements and commentary. I found next to nothing. And, stunningly, the most reputable broadcast journalists in the land conducted three televised presidential debates with not one question about constitutional issues.

In a functioning republic, citizens can reasonably depend on a free press to prioritize the issues.

In a country that has lost its way, nobody can depend on anything.

In a country that has lost its way, a Congress that is not truly representative allows two consecutive presidents, one from each party, to drastically violate law without repercussions, and journalists report it as business as usual, because they still use words and concepts that apply to a different country, a country that used to be.

People who cannot see past their own vocabulary and cannot face how their assumptions no longer apply – that is the press you get in a country that has lost its way, a country in which the only consensus is that we cannot bear to face what we've become.