Letters at 3AM: Just Since April

Secret surveillance efforts fly in the face of our Constitution 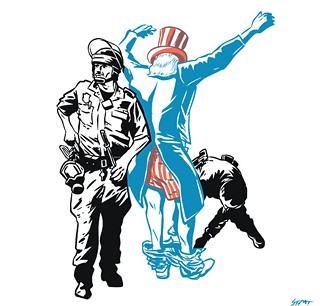 "Shitstorm" isn't a polite or journalistic usage, but an apt equivalent doesn't come to mind, so: In April, when I began the "Arbitrary Nation" series about our battered Constitution, I had no idea we were in for an unprecedented Constitutional shitstorm.

What follows isn't all of it, but it's all that fits. (Quotes and headlines are from The New York Times unless otherwise noted.)

April 2: "Supreme Court Ruling Allows Strip-Searches for Any Arrest." The court gave police the power to humiliate anyone arrested for anything.

May 13: "Federal investigators secretly seized two months of phone records for reporters and editors of The Associated Press."

May 14: Attorney General Eric H. Holder "[described] the article by The A.P. that prompted a criminal investigation as among 'the top two or three most serious leaks that I've ever seen.'" The Obama administration seems to say pretty much the same thing about every leak. This particular leak refuted White House claims concerning al Qaeda plots. The Justice Department "dragnet covered work, home and cellphone records used by almost 100 people at one of the oldest and most reputable news organizations."

May 18: Fifty years ago, in Brady v. Maryland, "the Supreme Court ... required prosecutors to disclose to criminal defendants any exculpatory evidence they asked for that was likely to affect a conviction or sentence. ... But, in fact, this principle ... has been severely weakened by a near complete lack of punishment for prosecutors who flout the rule."

May 20: "In another case of the Obama administration investigating [leaks], the government is prosecuting a State Department expert on North Korea in a probe that appears to step into uncharted territory – by declaring that a journalist is committing a crime in disclosing leaked information. ... 'We are outraged to learn today that James Rosen was named a criminal co-conspirator for simply doing his job as a reporter,' said Michael Clemente, Fox's executive vice president for news. 'In fact, it is downright chilling. We will unequivocally defend his right to operate as a member of what up until now has always been a free press" (Associated Press).

May 23: In a speech about drone warfare and Guantánamo Bay detentions, President Obama promised he'd work "to align our policies with the rule of law" – a tacit admission that his policies are unlawful. Fast forward to this August 2 headline: "Despite Administration Promises, Few Signs of Change in Drone Wars." As for Gitmo, signs of change there are even fewer.

May 30: "[T]he lawyer who approved [George W. Bush's] domestic spying program is about to be put in charge of the FBI. ... [James] Comey will run the FBI alongside Obama's chief of the CIA, John Brennan, who spent the Bush years advocating multiple torture techniques and rendition" (The Guardian).

June 3: "Justices Allow DNA Collection After an Arrest." Justice Antonin Scalia dissented vigorously: "Make no mistake about it: because of today's decision, your DNA can be taken and entered into a national database if you are ever arrested, rightly or wrongly, and for whatever reason."

June 5: The Guardian began releasing Edward Snowden's stunning proof that NSA warrantless Internet and phone surveillance is constant and total. Every call, every click, everyone, everywhere.

June 12: "Police Agencies Are Assembling Records of DNA." "These local databases operate under their own rules, providing the police much more leeway than state and federal regulations."

June 17: Obama went on Charlie Rose to tell Americans that "you have federal courts overseeing the [surveillance] program ... and you have Congress overseeing it." The polite Rose wouldn't push to clarify that FISA courts aren't really courts and rarely deny warrants, nor did he mention Snowden's proof that Director of National Intelligence James Clapper flat-out lies to his "overseers," and does so with full White House approval.

July 3: "U.S. Postal Service Logging All Mail for Law Enforcement." "[P]ostal mail is subject to the same kind of scrutiny that the National Security Agency has given to telephone calls and email."

July 17: Former president Jimmy Carter said, "America no longer has a functioning democracy." No major American news outlet reported or commented upon his statement. [More on this next time.]

July 19: "Court Tells Reporter to Testify in Case of Leaked C.I.A. Data." New York Times journalist "[James] Risen has vowed to go to prison rather than testify about his sources."

July 25: The free world was treated to the spectacle of an American Democratic president and Republican and Democratic party leaders arm-twisting in the House to protect the power of government to spy on every call and click of everyone everywhere. The Tea Party and what's left of the left joined hands and lost, but they surprised their establishments with a 205-217 vote. Rep. F. James Sensenbrenner Jr. (R-Wis.), the primary author of the Patriot Act, "said his handiwork was never meant to create a program that allows the government to demand the phone records of every American. 'The time has come to stop it.'"

But what was really at issue here? Rep. Jerrold Nadler, (D-N.Y.), "said the amendment would reimpose the original intent of Congress."

Get that? The ballyhooed rebellion in the House was intended to reinstate the original Patriot Act.

If you harbor a very dark sense of humor, that's funny.

July 30: David Leonhardt, the Times Washington bureau chief, said the reporters "had a surveillance question on their list but they didn't get to it."

August 5: "Secret US drug agency unit [is] passing surveillance information to authorities. Wiretaps and telephone records are being funnelled across the country to launch criminal investigations of Americans – ... [L]aw enforcement agents have been directed to conceal how such investigations truly begin – not only from defense lawyers but also sometimes from prosecutors and judges" (The Guardian).

The president said, "There is no spying on Americans. We don't have a domestic spying program."

August 9: The president held a news conference promising more transparency about a domestic spying program he said we don't have. But "Mr. Obama showed no inclination to curtail secret surveillance efforts."

Letters at 3AM: An Arbitrary Nation, Part 5
Our Bill of Rights guarantees are breaking down in state justice systems across the country