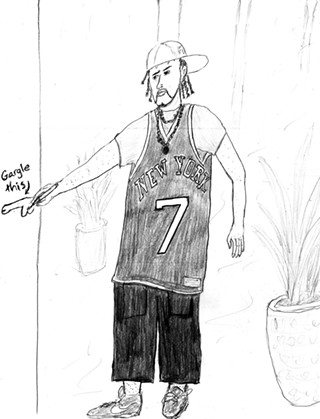 Luv Doc,
Seventeen years ago my good friend made me the godfather of his son. At the time I remember being honored by it. He even gave his son my first name. Over the years as my godson has grown up he has turned into a spoiled, hugely obnoxious attention whore that I can’t stand to be around. His birthday last weekend was no exception as he threw a tantrum when he was told that he had to spend some time with his relatives before he went out with his friends. I was there to witness it, but didn’t say anything. Am I being derelict in my duties as his godfather by not pointing out to my friend what an asshole his son is?
- The Godfather

Being a godfather sounds so cool at first – when you pretend to be Don Corleone by filling your cheeks with mashed potatoes, jutting your chin out, and mumbling something about justice on your daughter’s wedding day. Then make-believe time is over and you’re holding a screaming baby over a baptismal font while a priest sprays it down with holy water and asks you to raise the child in the hallowed tradition of the One True Church. “Sure Padre,” you say, thinking, “how tough can this be?” Then the kid’s parents move off to Massepequa, Long Island and you go on a 15-year tequila binge.

Smash cut to a kid wearing a backward FUBU baseball cap, line beard, braids, gold chains, and shorts that end just shy of his ankles. You’d like to give him credit for just being a moody teen with horrible fashion sense but then you catch him tagging a pillar in the Embassy Suites atrium with a Sharpie penis above which is written, “gargle this.” After a few seconds of adolescent chuckling you suddenly realize that your godson is an irredeemable sociopath who will either end up as a hose monkey on a honey dipper or on the cast of Jackass. Either way, well done, Don Corleone, well done.

Yes, in hindsight a constant stream of epistles instructing your young charge in the ways of gentlemanly conduct might have turned the tide in his character development, but at this point the ball has been fully dropped. The die is cast. The best that you can hope for at this point is an enthusiastic prison pen pal. Yeah … like he can write.

Kids are inevitably disappointing - almost as disappointing as their parents … and godparents. So what to do now? Well, unless you have a time machine, you can’t change the past, so to ease your guilty conscience I would suggest getting involved. Baby steps, mind you. You could maybe even talk to your friend about your concerns, but unless you’re truly willing to get your hands dirty, it’s best to let go and let God. Changing people’s lives is a complicated, messy business, so you’re really going to need to find your motivation from someplace other than an advice column.