Letters at 3AM: The Patriot Edward Snowden

Disclosures by the patriot Edward Snowden will have at least one penetrating and unpredictable result: Even though Americans may not face what we've enabled two administrations to do to us, and we may go on denying that we've become the nation we've become – now the whole world has seen proof. The world will not forget, and the world will not let us forget.

That said, the devil is in the details, so let's pay him a visit.

The Booz Allen Hamilton gang: Mike McConnell was the National Security Agency director from 1992 to 1996, after which he became a senior vice president at Booz Allen Hamilton (the company that employed Edward Snowden). McConnell created the company's first cyber units. Then, from 2007 to 2009, McConnell was George W. Bush's director of National Intelligence. At that time, he lobbied Congress to revise the Foreign Intelligence Surveillance Act and free the NSA from "burdensome" rules. He returned to Booz Allen in 2009. His first year back, the company paid McConnell $4.1 million (The New York Times, June 16).

Booz Allen got its money's worth. With McConnell's ever-growing intelligence contacts, the company's net income from government contracts went from $25 million in 2010 to $219 million "in the [recent] fiscal year." McConnell is now Booz Allen's vice chairman, earning a fee last year of $2.3 million (same article).

June 15's The Economist listed "a number of high-ranking cyber-security experts from places such as the FBI, the Department of Homeland Security (DHS), and the White House" who are now working in the "emerging cyber-industrial complex." In fact, "[w]ith few regulations and no questions being asked on Capitol Hill, hundreds of former top N.S.A. and C.I.A. officials have migrated from government to the private sector and back again" (The New York Times, June 18).

There is no evidence that the patriot Edward Snowden threatened United States security. Instead, his revelations expose and threaten a private cyber-security industry that is unregulated, subject to no serious oversight, and violates the letter and spirit of the Bill of Rights.

McConnell and Clapper piously speak of defending the country, but what they defend is a wildcat industry that affords them great personal wealth and unquestioned power. As they and their kind ferry from private sector to public sector and back again, and as their paychecks and powers grow, every public word they say distills down to two: "Trust us."

Lies to you and me: Of the many, here's my favorite: The Obama administration dispatched all sorts of men with all sorts of credentials to tell TV anchors that Edward Snowden could not possibly have the access he claimed. But, on June 18, former NSA whistle-blower Thomas A. Drake told CNN's Erin Burnett, "Snowden was a systems administrator. He was responsible for keeping the systems running. ... A systems administrator would have the ability [to do what Snowden did]." Other knowledgeable people have agreed.

And now: "'NSA Plans to Institute a Two-Person Rule to Govern Activities of SysAdmins': This would presumably involve requiring a shadow for every sysadmin to ensure that no one operator can download the kind of data Snowden obtained" (Wired, June 18). The Obama White House isn't saying officially, but its before-and-after positions amount to: Snowden couldn't do what he claims and no one will do it again.

Testifying before the Senate Intelligence Committee, Clapper was asked by Sen. Ron Wyden [D-Ore.], "Does the NSA collect any type of data at all on millions or hundreds of millions of Americans?"

Clapper: "Not wittingly. There are cases where they could, inadvertently perhaps, collect – but not wittingly."

It's widely reported that Clapper received the committee's questions in advance. The next day, he was given the opportunity to clarify. He let his "No" stand.

After Snowden's revelations, Clapper gave this widely quoted statement: "I responded in what I thought was the most truthful, or least untruthful, manner, by saying, 'No.'"

Alice in Spyland, where the least untruthful response is a big fat lie.

Somewhat less obvious: Clapper is not a liar – not by any common definition. He sees himself as a man of integrity whose duty is to tell the lies that his superiors trust him to tell. They are not his lies alone. They are President Obama's lies, former Defense Secretary Leon Panetta's lies, NSA Director Keith B. Alexander's lies – the lies of everyone high enough in government to know what's what and to lie about it.

Clapper may become the fall guy sooner or later, but that comes with the gig. He can always return to a generous salary at Booz Allen Hamilton.

"Very strict supervision": You hear it all over, especially from the president: assurances that the spy-on-us programs are, as Obama said, "under very strict supervision." He often cites what he calls "the courts." NSA Director Alexander assured the Senate Appropriations Committee that this was so. On June 11, The New York Times' Thomas L. Friedman wrote that the programs are "under constant judicial review." Sen. Mitch McConnell (R-Ky.) holds that Congress and the courts "rigorously" oversee the process (The New York Times, June 12). The Associated Press used the phrase "under court supervision," and Clapper, too, said it was "court supervised" (Associated Press, June 8). Assistant Attorney General Ronald Weich varied the usage to "court-authorized" (The New York Times, June 9).

The Economist of June 15 summarized FISA courts thusly: "[J]udges sitting in a secret court who issue secret data-collection orders which bind the recipients to secrecy. ... The legal opinions that govern the process are secret, also."

CNN reported that during Obama's administration FISA courts have turned down exactly one request (June 10). NBC reported no, not one; two.

To call the FISA process "courts" is a sly way to lie. The administration well knows that what "court" means to the average citizen bears no resemblance to FISA procedures.

The polls: Most polls indicate that most Americans would like to forget about all of it. "Too bad," wrote Maureen Dowd in The New York Times on June 16. "We'll see what Americans have to say when someone in the mold of Dick Cheney or Bob Haldeman gets his hands on all that personal data."

The patriot Edward Snowden stands alone against an immense mass of government power. He spoke his credo in his initial statement: "You can't wait around for someone else to act." He is the American equivalent of that Chinese gentleman who stood in front of that tank in Tiananmen Square. 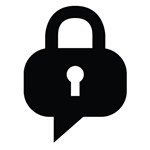 Online Privacy: Technical, Political, or Both?
When it comes to encryption, there's solidarity in numbers