Is this a turn of the page or an entire new chapter? 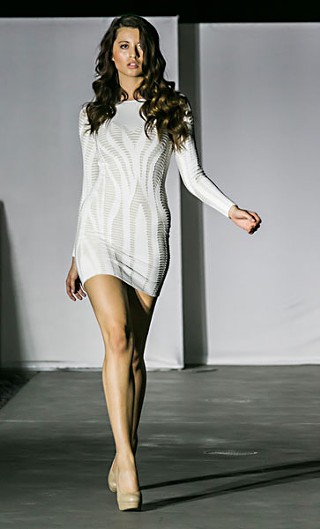 A new look from the recent Young & Fabulous womenswear show (www.young&fabulous.com), poolside at the W (Courtesy of Jared Tennant)

Slowly but surely, I've been moving out of my mom and sister's house in Manchaca. I moved in about four years ago after my breakdown. I was in bad shape, and the implicit theory was that I'd moved in with them to die. But I forgot to die. In fact, I failed miserably at dying. A little over a year ago, I began to feel the stirrings of life through my numbness. For the first time in my life, I didn't know or care which direction I was going ... as long as it wasn't the direction I'd gone before. In eight months I produced four fashion collections. It unveiled a brightness of light that I couldn't identify but began to pay close attention to. That misty vision drove me to work harder; I wanted the brightness to illuminate my mind and tell me what to do and where to go. I fell into the old patterns, thinking, "Well, maybe I'll turn this design work into a company, and try and regain some of the success I've had in the past." But that had only worked sporadically before. I was rapidly stripping away the old conditioning. During all this, I hardly went home at all, and I was distinctly aware that it was feeling less and less like "home." I was happy staying at my studio for days or weeks on end, just designing clothes. After relocating my studio temporarily to Jacki Oh's house to work on my collection for Dallas, I wasn't sure what I was going to do. The light had become a force that practically propelled me to keep steady on my unknown journey. I trusted it to lead me to the right path. Before the Austin Fashion Awards, Grant Hicks and I had been on a journey of our own. Through him and his love and encouragement of my work, and the fact that I was dizzyingly inspired by him wearing my clothes like a sartorial god, our bond grew stronger. When I left Jacki's, I moved my studio (and myself) into Grant's home – a magical setting full of spirit and life – and I began to waiver in my faith in the light, not sure what I was doing. But over the development of Grant's and my relationship, we both realized that we weren't seeing much of a future for ourselves here. Being old and infirm, I resisted the idea of uprooting myself and following some vague spirit. But it was my complacency talking, and, upon analyzing my feelings, I knew I was simply clinging to old thoughts that corresponded with someone else's idea of what success was. It was time to reject the expectations put on me that had caused such grief and drama for me all my life. Grant was aware that something out there was luring him away from this place as well. Despite having long outlived the doctor's prognosis, I could not avoid the fact that my days were numbered (though, who knows how many numbers I had). Grant and I have decided to set out on a physical and spiritual journey to discover ourselves ... or more about ourselves ... without expectations, except that we would eventually wind up arriving in L.A., a place that has held allure for each of us separately. It's not even about what we will find upon reaching L.A.; it's strictly about the journey. We're planning a circuitous route, visiting many of the spiritual places across the West and exploring ancient traditions. Even if we find out that being in L.A. is not what we want, there is a solid assurance that something we'll see or experience on the journey will determine exactly where we need to be and what we are supposed to do there. It is faith – albeit blind faith – but faith is never something I've had before. It is a dazzling gift that imbues incredible strength, and in turn allows us to pass the gift on. Sounds like Nirvana to me.

Since this is the Chronicle's Food Issue, I have two words: Oysters Contra­band. My family has been going to Curtis Clarke's Evangeline Cafe (8106 Brodie) for several years, and all of the Cajun food there is scrumptious. But the Oysters Contraband are to die for. Oysters and a light jalapeño remou­lade sauce on homemade potato chips are Curtis' gift to humanity, and what a gift it is.