Letters at 3AM: Obama's May 23 Speech 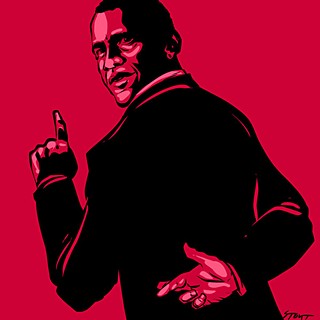 On May 23, President Obama gave a speech billed as his most important foreign policy statement. It concluded with a resolve to close the prison at Guantanamo Bay, Cuba.

That evening on MSNBC, Rachel Maddow interviewed Jameel Jaffer, deputy legal director of the American Civil Liberties Union, who said of the speech: "When you get to the level of details, a lot sort of slips between your fingers. It's very difficult to pin down the language of this speech."

Let's do exactly that.

Obama: "We unequivocally banned torture, affirmed our commitment to civilian courts, worked to align our policies with the rule of law, and expanded our consultations with Congress."

Item 1: Torture. "The changes [regarding torture] were not as drastic as most Americans think. ... Americans can now boast that they no longer 'torture' detainees, but they cannot say that detainees are not abused, or even that their treatment meets the minimum standards of humane treatment mandated by the Geneva Conventions" (The New York Times, Jan. 21, 2010).

Item 2: "Working to align" one's policies with the rule of law is an admission that those policies weren't aligned – i.e., lawful – in the first place. And "working to" means that they're not lawful yet.

Item 3: "Expanded our consultations with Congress." The Constitution requires the president to do considerably more than consult Congress, but President Obama "rejected views of top lawyers at the Pentagon and the Justice Department in deciding that he had the legal authority to continue American participation in the air war in Libya without Congressional authorization" (The New York Times, June 18, 2011). Since Libya, Obama hasn't sought authorization for drone actions in Yemen or in Africa. The president has no constitutional right to go to war on his own.

Obama: "In Afghanistan, we will complete our transition to Afghan responsibility for that country's security. Our troops will come home. Our combat mission will come to an end." What about U.S. presence that isn't technically "combat," like our so-called "contractors"? It's well-documented that thousands of American paramilitary contractors operate in Afghanistan. Also, what about the enormous State Department presence? Not to mention the CIA.

Obama: "[O]ur actions are effective. ... Moreover, America's actions are legal. ... Under domestic law, and international law, the United States is at war."

Item 2: "America's actions are legal." In this White House, legal is a permeable notion, as in: "Senator Ron Wyden [D-Ore.] ... a member of the Intelligence Committee, said that the executive branch had come up with a secret legal theory about what it could collect under a provision of the Patriot Act that did not seem to dovetail with a plain reading of the text. 'I want to deliver a warning this afternoon: When the American people find out how their government has secretly interpreted the Patriot Act, they will be stunned and they will be angry.' ... Senator Mark Udall, Democrat of Colorado, [added that] 'Americans would be alarmed if they knew how this law is being carried out'" (The New York Times, May 27, 2011).

When the Senate Armed Services Committee Report on Detainee Treatment examined George W. Bush's policies, it concluded that his administration "redefined the law to create the appearance of legality" (The New York Times, April 22, 2009). As Senators Wyden and Udall reveal, Obama's administration does the same.

Obama: "[O]ver the last four years, my administration has worked vigorously to establish a framework that governs our use of force against terrorists – insisting upon clear guidelines, oversight and accountability that is now codified in presidential policy guidance that I signed yesterday."

Oh? "A new classified policy guidance signed by Mr. Obama ... will impose the same standard for strikes on foreign enemies now used only for American citizens deemed to be terrorists" (The New York Times, May 22).

Excuse me, what standard? No standards have been published or explained. Therefore: What clear guidelines? What accountability?

Obama: "[B]efore any [drone] strike is taken, there must be near-certainty that no civilians will be killed or injured, the highest standard we can set. ... [B]y narrowly targeting our action against those who want to kill us, and not the people they hide among, we are choosing the course of action least likely to result in the loss of innocent life."

He's speaking as though he's never heard of so-called "signature strikes," as in: "The United States has begun launching drone strikes against suspected al-Qaeda operatives in Yemen under new authority approved by President Obama that allows the CIA and the military to fire even when the identity of those who could be killed is not known" (The Washington Post, April 25, 2012).

Obama: "[Congress] is briefed on every [drone] strike that America takes, every strike. ... Going forward, I've asked my administration to review proposals to extend oversight of lethal actions outside of war zones that go beyond our reporting to Congress."

That's quite a mouthful. The "briefings" Congress receives merely report. Notice Obama doesn't say he'll extend oversight; he says his people are reviewing proposals. The assumption is that the extent of congressional involvement is up to the White House and not the Constitution.

Obama: "For the record, I do not believe it would be constitutional for the government to target and kill any U.S. citizen – with a drone or with a shotgun – without due process. ... But when a U.S. citizen goes abroad to wage war against America and is actively plotting to kill U.S. citizens ... his citizenship should no more serve as a shield than a sniper shooting down on an innocent crowd should be protected from a SWAT team."

Sneaky little metaphor, dishonest to the core. See, you don't have to prove a sniper is shooting; it's self-evident. But you must prove a plotter is plotting. That's what due process means.

Obama: "During the past decade, the vast majority of those detained by our military were captured on the battlefield."

Liar, liar, pants on fire. A Wikipedia entry quoting from a Huffington Post article posted December 7, 2009: "[In] a 2006 report prepared by the Center for Policy and Research, Seton Hall University Law School reviewed [Department of Defense] data for ... 517 men [at Gitmo] in 2005 and 'established that over 80% of the prisoners were captured not by Americans on the battlefield but by Pakistanis and Afghans, often in exchange for bounty payments.' The U.S. offered $5,000 per prisoner and distributed leaflets widely in the region."

Maureen Dowd: "[S]ince 2012, Congress has granted authority to the secretary of defense to waive those restrictions on a case-by-case basis. The administration hasn't made use of that power once. So it's a little stale to blame Congress at this point" (The New York Times, April 30).

Gitmo hunger-strikers and a newly anxious Congress put the heat on, and Obama responded with a speech that deftly weaves vagueness, misdirection, and a few outright lies to make his usual good impression while committing to nothing concrete except "engaging Congress" – which, as even his supporters must admit, is something he really sucks at.