Letters at 3AM: An Arbitrary Nation, Part 3 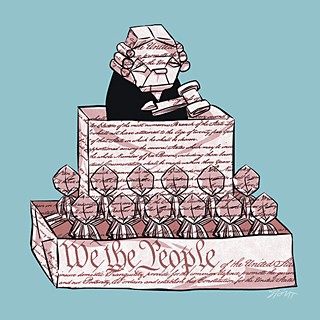 A law arbitrarily enforced (or not enforced) according to the whims of the authorities is no longer a law.

That is the premise as we examine the Constitution.

On to the Fifth Amendment: "No person shall be held to answer for a capital, or otherwise infamous crime, unless on a presentment or indictment of a Grand Jury, except in cases arising in the land or naval forces, or in the Militia, when in actual service in time of War or public danger; nor shall any person be subject for the same offense to be twice put in jeopardy of life or limb; nor shall be compelled in any criminal case to be a witness against himself, nor be deprived of life, liberty, or property, without due process of law; nor shall private property be taken for public use, without just compensation."

It says, "No person." There isn't a distinction between citizen and noncitizen. Except for those "in actual [military] service in time of War or public danger," the authorities are not permitted to exclude anyone from due process of law.

Since September 11, 2001, Congress and two administrations have decreed that the Fifth Amendment doesn't apply to foreigners accused of terrorism.

Most Americans are fine with that – Bush and Obama supporters alike. If any are queasy, they've been queasy quietly. Let's let government make exceptions, here and there, where the Fifth Amendment is concerned. Let's look the other way – even in May 2002, when an American was arrested on American soil without warrant, detained without trial, and tortured.

Jose Padilla was "denied contact with his lawyer, his family or anyone else outside the military brig for almost two years and kept in detention for almost four. His jailers made death threats, shackled him for hours, forced him into painful stress positions ... denied him care for serious illness and more. ... [He sued, but, in May 2012,] the United States Court of Appeals ... decided that Mr. Padilla's lawsuit [could not] go forward. ... The unanimous opinion contends it was not 'beyond debate' that Mr. Padilla, a citizen declared an enemy combatant, was entitled to the same protections as any accused criminal or convicted prisoner. ... [T]he Supreme Court [ruled in May 2011] that 'existing precedent' must put any question about such a right 'beyond debate'" (The New York Times, May 3, 2012).

The Fifth Amendment already put that right beyond debate. But not anymore. "Existing precedent" cancels it out, says the Supreme Court.

On Sept. 30, 2011, another American citizen, Anwar al-Awlaki, was executed in Yemen, via drone, by order of the president. The White House says that's legal, but won't say why, nor why the memorandum justifying the president's power to kill Americans was "written more than a year before Mr. Awlaki was killed" (The New York Times, Oct. 8, 2011).

The administration has successfully created such a murky atmosphere that eight Democratic and three Republican senators signed a letter requesting the appropriate documents to judge "whether the president's power to deliberately kill American citizens is subject to appropriate limitations and safeguards" (The New York Times, Feb. 5).

Excuse me? What "president's power to deliberately kill American citizens" are we talking about? There is no such power in the Constitution. Is the president's power to kill now assumed by Congress as long as there are "appropriate limitations and safeguards"? (Let's pause and breathe deeply.)

Three months after President Obama ordered al-Awlaki's execution, he signed the National Defense Authorization Act, specifically designating that Americans, on American soil, may be arrested without warrant and detained indefinitely without trial (as had already occurred with Jose Padilla).

A year later, the House and Senate reauthorized the National Defense Authorization Act, deciding "to drop a provision that would have explicitly barred the military from holding American citizens ... in indefinite detention without trial" (The New York Times, Dec. 18, 2012).

We started with, "No person can be held to answer for a capital, or otherwise infamous crime, unless on a presentment or indictment of a Grand Jury." Now we're at: The president can arrest, detain, and execute at will.

Meanwhile, some Americans sued to see the secret memo that justifies a president executing U.S. citizens. But "a federal judge in Manhattan refused ... to require the Justice Department to disclose [the] memorandum[.] ... The ruling, by Judge Colleen McMahon, was marked by ... frustration with her own role in keeping the legal rationale for it secret. 'I can find no way around the thicket of laws and precedents that effectively allow the executive branch of our government to proclaim as perfectly lawful certain actions that seem on their face incompatible with our Constitution and laws while keeping the reasons for their conclusion a secret,' she wrote. 'The Alice-in-Wonderland nature of this pronouncement is not lost on me,' Judge McMahon wrote, adding that she was operating in a legal environment that amounted to 'a veritable Catch-22'" (The New York Times, Jan. 2).

That legal thicket is the interlocking mischiefs of the Patriot Act, the Military Commissions Act, the National Defense Authorization Act, etc., for which Democrats and Republicans are equally responsible.

In January, NBC News got hold of a "white paper" summarizing the execution memorandum that, until then, the White House denied even existed. It states: "The condition that an operational leader present an 'imminent' threat of violent attack against the United States does not require the United States to have clear evidence that a specific attack on U.S. persons and interests will take place in the immediate future."

Steve Coll in The New Yorker, May 6: "Does the President require that intelligence used to convict a terror suspect in absentia be based on multiple sources, or is one sufficient? Must intercepts, photographs, or credible firsthand testimony be obtained, or can people be executed on the basis of hearsay from paid informants? ... At what point does a preacher's hate speech warrant his being killed?"

Sen. Rand Paul (R-Ky) famously staged a 13-hour filibuster to ask the White House whether it would order drone attacks against Americans on American soil. Attorney General Eric Holder didn't say no, though many reports claimed he did. Holder said the president wouldn't dispatch drones after Americans "not engaged in combat on American soil"; but what if, as with al-Awlaki, "engaged" means preaching and allegedly planning? Holder's answer, in other words, was more yes-and-no than no.

Now Congress talks of a "court for targeted killings," "an analogue to the Foreign Intelligence Surveillance Court that Congress set up in 1978" (The New York Times, Feb. 13). The White House is seriously considering it.

Here's where the flim-flam flies.

The Fifth Amendment no longer exists as a functioning law of the land. 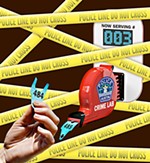 Survivors Hit Back at City, County in Court
Plaintiffs hit back at motions to dismiss in sexual assault class-action suit