Stephen reminisces and plays "No, you!" "Oh no, you!" with Daniel Esquivel 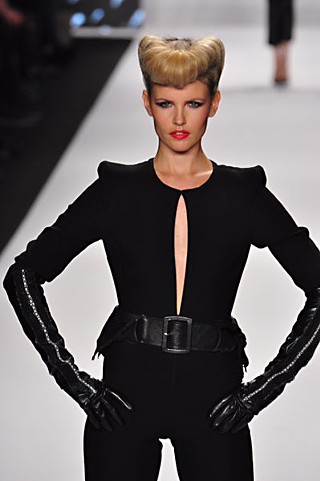 The Octopus Club's fabulous annual ArtErotica fundraiser was possibly my favorite yet ... and I've been to many of them. Utilizing the entire old Home Depot space on North I-35, the event flowed evenly and smoothly, accommodating the large display of donated art, including the Penis Project and the Vagina Project. As one of the judges, I had so much to choose from. Personally, I gravitated away from the more graphic depictions of erotic art, and leaned more toward those that simply suggested the eroticism. With the judging out of the way, the fun began with the crowd in full regalia. I love that ArtErotica has become such an entertaining costume affair. Grant Hicks and I donned stilettos and women's wear for the event. Grant wore my now-famous Stegosaurus dress, with a smart bobbed wig. I, as skeletal as possible while still ambulatory, looked like an aging German hooker in a rubber-look turtleneck minidress with a Versace belt across my hips, black lambskin trench coat, and a Lady Gaga-ish wig. The parade of drag queens, goths, leathermen, and those that fall in between created a circuslike atmosphere of celebration and freedom that seems rare these days outside of underground culture. But leave it to the Octopus Club and their alliance with AIDS Services of Austin (ASA) to make fundraising a true joy.

Speaking of ASA, Grant (as Lady Aura Gentry) and I also attended the Downton in Austin tea party luncheon last week hosted by ASA's Women's Giving Circle, which aims to create a community of interest around women in Central Texas living with HIV and AIDS. Benefitting the Women Rising Project, featured speaker Katryn Amundson read from her book When Daddy Brings Home AIDS, a deeply moving story about the deaths of both her parents from AIDS when she was a child. The Marvelous Vintage Tea Party Co. (www.marveloustea.com) handled the food and decor with a truly charming and freshly modern, vintage twist. Owner Sophie Parrot, hailing from England of course, really knows how to throw a tea party.

My phone rang with a strange number on the screen. I considered silencing it, but something told me to answer. "Hello?" I answered tentatively. "Stephen, it's Daniel Esquivel." "Daniel!" I shrieked. We haven't spoken in some time, yet I've been following his brilliant design work on Season 11 of Project Runway. His throaty laugh rang in my ears, and we were both talking at once about how glad we were for each other's successes. His successes, of course, are a national obsession, leaving America and beyond gasping for more. The clothes are chic, chic, chic, and Daniel has some of the most deft hands in the business. His finale collection? To die for. So sharp, so structured, so refined. He intimated about a possible large manufacturing deal; should he win Project Runway, his career will be propelled into the stratosphere. I was really touched when he pointed out that I'd mentioned him in a very early column in my Austin Chronicle career. I'd mentioned that Miss Kitty had worn a Daniel Esquivel skirt. Suddenly, I remembered the exact skirt and event: the Locks of Love fundraiser, seemingly a thousand years ago. He was shocked that I remembered all that, and, frankly, I was too. But I'd never forgotten him, and he'd never forgotten me (I was humbled by his kind congratulations on my recent collections). With such publicity, it's hard not to keep up with Daniel. And the attention is richly deserved for this Austinite and his particular brand of magic. See whether Daniel wins Project Runway this Thursday night, April 25. Daniel is showing Friday, May 10, during Austin Fashion Week, and I will be front row at his show ... and he promised to be front row at my show the next night as I close the Austin Fashion Awards on Saturday, May 11.

Beloved "After a Fashion" photographer Seabrook Jones passed away in the very early hours of Wednesday, April 24. This column will never be the same. Please join us in sending heartfelt condolences to his family; his partner, Francis Prève; and his extended family of friends. Next week this column will feature some of Seabrook's work through the years.