Letters at 3AM: Me, Myself, I, and Muriel

A poem can awaken many selves 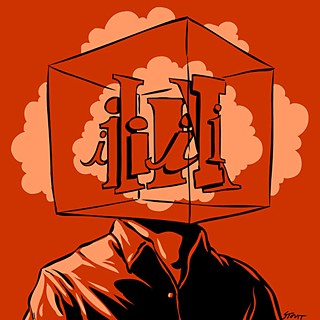 When I taught high school, I'd go to the blackboard, choose a white stick of chalk, and draw a cube. In its center I'd write an uppercase I.

Then, with my white chalk, I'd draw a figure of similar size: a squiggly, uneven oblong, like the outline of a cloud. Then, with several sticks of colored chalk, I'd write I and i in varied sizes and at varied angles, and note that an upside-down I looks just like a right-side-up I.

"Here's the deal," I'd say. "The cube: That's how Western society, especially American society, defines the individual. He/she possesses firm, easily measurable boundaries, and is governed by a central self, or ego, or I; that same central self signs your checks, lusts after whomever, does your homework, and says 'Merry Christmas.' But some folks question this. They'd draw the cloudlike figure and say, 'What if an individual is not so clearly boundaried? What if your I when you're with your friends is significantly different than when you're with your parents? What if you even gesture and move with different I's – different when you're superdressed for the prom as opposed to hanging out in a bathing suit? What if you experience different I's going from one thing to another all day? It's all you, feels like you, but the behavior varies – sometimes, it varies a lot.

"For instance, my friend Mikey, who's a shrink, says, 'Whenever I walk into my parents' home I lose 20 points of IQ.'

"At the same time, there is an incredible consistency to the individual. A kind of atmosphere, or general mood, or rhythm of being, that remains an individual's signature for keeps. I look across a parking lot and there's a high school friend whom I haven't seen in 20 years. He is Mark, exactly Mark, though he's heavier and has lost most of his hair. When we shake hands he says, 'You haven't changed,' though I also have changed. There's an amazing consistency to the individual, and a simultaneous and equally amazing fluctuation."

These notions are not original with me. Check out psychiatrist R.D. Laing's The Politics of Experience (1967):

"Consider the metamorphoses that one man may go through in one day as he moves from one mode of sociality to another – family man, speck of crowd dust, functionary at an organization, friend. These are not simply different roles: each is a whole past and present and future, offering different options and constraints, different kinds of closeness and distance, different sets of rights and obligations, different pledges and promises.

"I know of no theory of the individual that fully recognizes this. ... [But t]he tired family man at the office and the tired businessman at home attest to the fact that people carry over ... various internalized social modes of being, from one context to the other" [Laing's emphasis].

Tonight I review that chalkboard lesson and throw in R.D. Laing for good measure, in order to talk about a poem – for, as Edward Albee put it in The Zoo Story, "sometimes a person has to go a very long distance out of his way to come back a short distance correctly."

You see, I don't know anymore how to talk about art. Especially about poetry. Lit-crit jargon is dull, and dull talk about art can't be right. Terms like "modernist," "postmodernist," and "romantic" are handy, I suppose, but no artist worth the name sets out to be one or the other. An artist is; the work is; and then people experience it and talk about it.

When I talk to myself about a poem, I look at how many of my selves it's awakened, how many of my I's are invited into it, and which aspects of who I am come more alive or take a hit. I don't mean: The more aspects, the better the poem. I mean: If it speaks to me, who's the me it's speaking to?

Rukeyser was a tough, independent poet, feminist, and activist, well to the left of what's called "left" these days. She died in 1980 at the age of 66. I read her a little when I was young, especially her translation of Octavio Paz's Sunstone, but she'd slipped from my awareness until the other day when Jaz sent me "Elegy in Joy." It's humbling to think you know some stuff and then find out you're ignorant of one of the the finest poems of the 20th century.

As I read its four verses (less than 200 words), all of me came alive.

In the first verse, "the lake in the eye that knows" opens to "the despair that flows down in widest rivers"; then a "tree of grace" sprouts in a line, and the next ends with "the love that gives us ourselves."

The love that gives us ourselves.

Are her plurals also meant for individuals? The love that gives us who we are, the "we" that I am, the selves I must find and name to be whole. Some of them have not grown up yet. Some are very old. Their gender varies. Some I'm sick of and some I don't know at all. A poem like this makes me feel that I'm a whole population.

"Blest" is an archaic usage. The Oxford English Dictionary dates it back to AD1000. The seeds of all things are anciently blessed. We are charged with nourishing, that we may bear ancient blessings forward.

There's no mistaking this, as we learn in the fourth and last verse: "This moment, this seed ... this look, this instant of love." It's right now that we need to be and act. Then comes a line that saddens with its exhausted familiarity: "Years over wars and an imagining of peace. Or the expiation journey/toward peace which is many wishes flaming together."

Then she invokes again, "Love that gives us ourselves" – which, after a comma, leads to a conclusion as swirlingly bright as a Van Gogh, that, again, connects modern and ancient. Rukeyser employs the word "technique," a word relatively new to English; the OED dates its from 1817, the beginning of the industrial revolution. Fifteen words later, Rukeyser employs "faring," a word that, according to the same source, has been with us for more than a thousand years.

(Among my selves are ancestors who know how to listen to her ancient words.)

"Love that gives us ourselves, in the world known to all/new techniques for the healing of the wound,/and the unknown world. One life, or the faring stars."

There is the world known to all, in which there are new thises and thats, and there is an unknown world. They are side by side, and part of one another, and the love that gives us ourselves is of both.