The Luv Doc: Got Filth?

The LuvDoc offers up solid advice for planners 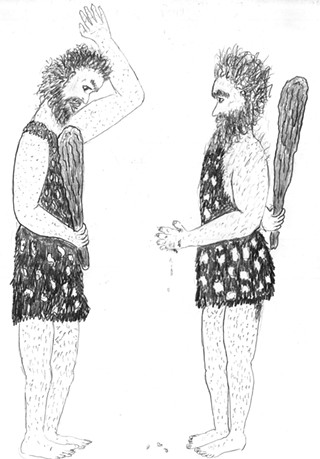 LuvDoc,
My roommate NEVER FUCKING CLEANS UP! EVER!!! He leaves his shit all over the apartment … clothes, shoes, dishes, paper towels, Kleenexes, FOOD … yes, actual food. He also has a sore on his knee that he’s been picking at for weeks. I would let him drown in his own filth but I have to live in it, too. What’s the best way to get him out before my lease expires in August?
- Disgusted

I think a lot of people could sympathize with you D, but not me. You seem really uptight and stressed. I would suggest you smoke a bowl and chillax, but marijuana is illegal in all the uncool states, and my guess is that you’re a rule follower, right? You like your ducks in a row. You like a schedule. You like to know what’s coming next. You don’t like being uncomfortable. You don’t like clutter and chaos – which is exactly what your roommate seems to be creating for you.

My guess is he is a veritable whirlwind of nutty dishevelment and entertaining antics - which is probably what initially attracted you to him, right? Now you roll out of bed in the morning and find the living room strewn with moldy pizza rinds, empty beer cans, and dirty socks and you think, “How can anyone live like this?” Easy. Remember: It’s only been a few thousand years since we lived in caves strewn with bones and animal skins and wiped our asses with our left hands. Why the left hand? Because everybody knows that’s the devil’s hand.

Actually – and this shouldn’t come as a big surprise: Certain people couldn’t deal with the anxiety of shaking the poop hand, and so there was probably some sort of planning session where a vote was taken and, voila, the minority got fucked, per usual. The happy news is that you’re in the majority: You don’t like shit on your shaking hand. Fair enough, but that comes with a price. People like you (Let’s just call them the planners) labor under the illusion that they’re in control, that with proper planning and preparation, they can mitigate the uncertainty and instability of life.

To a certain extent that’s true, but in a larger context, it’s not. We’re all on a screaming luge ride to the grave. Why not just throw your hands up and enjoy it? Think of all the time you spend planning for possible outcomes in your head that don’t yet exist and might not ever. Think of all mental energy you expend trying to please people you’ve never met and probably never will. While you’re busting your ass saving for your future my bet is that your roommate is sitting on his ass enjoying his present, muddling through life, managing somehow – both to miraculously get by and more importantly (and even sweeter still) to annoy the shit out of you and everybody else who thinks they have it locked down.

My advice: Instead of spending the next few months developing an aneurysm trying to get your roomie to stop living like a pig, spend that time learning to embrace and enjoy the chaos he creates.