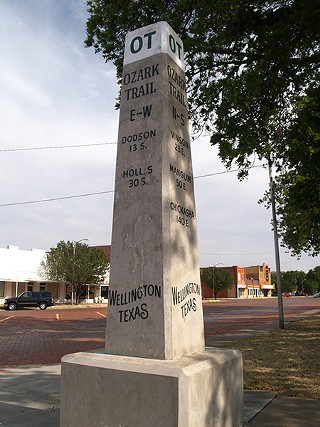 The Ozark Trail cut a scenic path across the Texas Panhandle in the early days of the automobile, before federal highways reached the hinterlands. If Route 66 was the "Mother Road," then the early auto trail out of Arkansas must be the "Father Road."

The spiderweb of primitive roads called the Ozark Trail, which stretched between St. Louis and El Paso, all led to the resorts in the Ozarks. Little hard evidence remains of the publicity campaign, other than concrete obelisks in Lake Arthur, N.M.; Stroud and Langston, Okla.; and Farwell, Dimmitt, Wellington, and Tulia, Texas.

The Ozark Trails Association was a highway promotion group invented in 1913 by an Arkansas resort owner. The idea was for municipalities along the routes to promote and maintain the road locally in exchange for being included on the association's maps.

The communities benefited by having tourists buying gasoline, food, lodging, and supplies on their way to or from the resorts. Twenty-one towns built the tall, tapered concrete shafts. On the sides were painted the distances to other towns on the trail.

By 1926, named highways, like the Bankhead Highway, Lincoln Highway, and the coast-to-coast Old Spanish Trail, were replaced by the U.S. Bureau of Public Roads with a numbering system. The northern portion of the Ozark Trail across the Texas Panhandle through Amarillo became part of the legendary Route 66.