Your Style Avatar learns that while 'sunglasses at night' might be cool, they also might be hazardous to your health 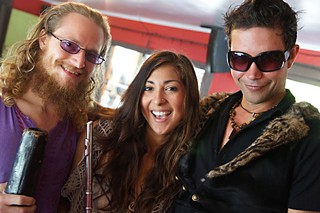 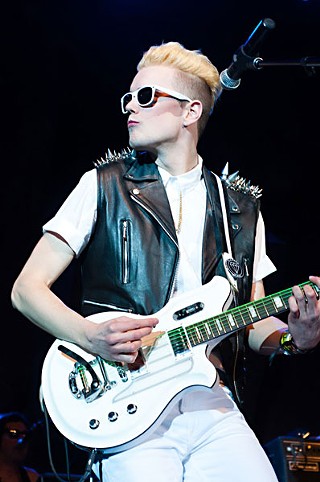 The handsome and talented Diamond Rings sparkled at the Music Hall during his official SXSW showcase last week. (Photo by Devaki Knowles) 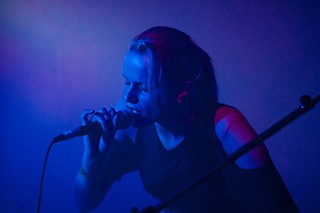 Maria Minerva captivated the crowd at the SXSW Not Not Fun showcase at the Hideout. This gorgeous glamazon has been featured in Paris Vogue, and we expect to see more gloss soon as her career takes off. (Photo by Devaki Knowles)

Went to Flipnotics last Saturday to see Grant Hicks in his debut performance with his group Real. Grant channels music clearly from other dimensions; much of it is simply beyond language. During their three segments, the unity of the improvisational performance anchored the show to Earth ... though my photographer Seabrook Jones indeed slipped into a trance while listening. The audience was extremely supportive, enough so that Flipnotics booked Real for another performance on Saturday, March 30... From there, we went to Shiner's Saloon for Austin Music Award-winner Morgan Sorne's performance. Already into the set as we arrived and pushed our way toward the stage, he writhed, howled, and seared the crowd with unparalleled energy and entrancing lyrics. The packed club vibrated and echoed as Sorne performed, and it is clear that he is hitting his stride as a popular performer... Off to the East Side Tone party where we saw Grant's bandmate Jenna Jasso, front and center, vocalizing and playing the flute and other instruments while almost flirting with her audience – an adorable performance from a new performer. The most notable incident of the day occurred, however, when we arrived at East Side Tone. Dressed to kill in black vinyl, black lace, black fur, and very dark sunglasses, I tripped over an unseen curb and landed flat on my face in the parking lot in front of a gaggle of SXSW visitors. Scraped, cut, and completely rattled, I was deeply humiliated as the gallant SXSWers gingerly helped me up, but realized that it was not only my pride and dignity that was hurt, but that I'd ruined my fabulous outfit. Not a pretty picture, I assure you.

Regretfully, we missed the first StyleCaster party (www.stylecaster.com) due to being hijacked and kidnapped. Fortunately, they were gracious enough to still send a personal invitation to another party a couple nights later despite our initial absence. I made a blood oath that Jacki Oh and I were not going to miss this party. The lineup of bands was fabulous, with headliners Tegan and Sara playing an absolutely mesmerizing set at the end. Once again being totally sure that a StyleCaster party would be populated with glamorous Austin folk and other stylish visitors, Jacki and I went into high gear, pulling our most fabulous ensembles together, ready for the photographers and dozens of compliments we would receive. Having been at H.O.P.E. Campaign's party at the Castle earlier, we hit the StyleCaster party around midnight. Making our entrance, we assessed the crowd quickly: "Okay, the stylish people must be sequestered somewhere else," we thought as we eyed a handful of cutely dressed young women, a couple of guys with real style, and hundreds of people who bore no relation to fashion or style at all. Gaping and gawking at us like we were freaks, those in flip-flops, shorts, and T-shirts seemed to visibly shrink back whenever we approached. We made the rounds, checking out every corner, looking for the fashionable crowd. We did not find it. After T&S' incredible set, the party was over and Jacki and I were only really disappointed because we didn't get to show our outfits off to anyone after all the trouble we'd gone to. Thank God that P. Terry's is open until 3am on the weekends.

I love deadlines. I love the sound they make as they whoosh by. By the time you read this, I'll be within 24 hours of leaving for Dallas for the fabulous House of DIFFA show put on by the Design Industries Foundation Fighting AIDS (www.diffadallas.org) on March 23. As I write, I am exactly one week away from rehearsal on the day of the show and still scrambling to get ready. Despite fears of showing in a city where I am not well-known, particularly among the notoriously fickle Dallas queens, I am ready to knock the bitches' socks off. Wish me luck. Better yet, be there and see it with your own eyes.