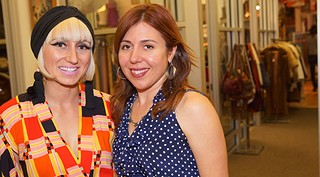 AWARDED So the breathless rumors of Johnny Depp showing up at the Austin Music Awards were just that. Rumors. Then there was the rumor that it was Prince who would make a special appearance. Another rumor. But the show didn't need Johnny Depp or Prince to make it fabulous. The award winners and performers themselves made it fabulous. From the touching opening speech in which my sister Margaret (recently diagnosed with and receiving treatment for cancer) paid tribute to our mother Phyllis Stegall (a cancer survivor herself, now with three out of four of her children actively battling cancer); to a sober and loving tribute to SXSW Creative Director Brent Grulke who passed away recently; to the sheer joy and passion of the winners. The dynamic Gary Clark Jr. won just about every possible award – it might as well have been called the Gary Clark Jr. Show. My friend John Pointer won for Best Classical Guitar, and another friend, Morgan Sorne, won Best Avant-Garde/Experimental. The Whiskey Sisters won Best New Band, and my favorite winner was Strange Brew for Best New Club. It's certainly my favorite coffee shop. For me, the Trishas were faaabulous. Sharp and stylish, I just drooled over them. And of course, the most stylishly dressed singer-songwriter is Alejandro, who played a searing set. I showed up in the nick of time for my mother's tribute, with a stylish entourage primarily wearing my new Made in Heaven collection. Jacki Oh wore a black dress and coat trimmed in coque feathers, which is destined for the DIFFA Dallas auction; Eva Strangelove wore a sheath of flat black sequins trimmed in sheared beaver; Grant Hicks wore the coque feather-trimmed platinum and black brocade jacket (also destined for the DIFFA Dallas auction); and I wore the new mulberry-colored velvet and metallic brocade sultan coat with Islamic brocade jeans (also destined for DIFFA Dallas). Adam Curry, Micky Hoogendijk, Guy Garcia, and Erin Boubel rounded out our group, and we stayed until the interrogation lights came on and forced us to go to the really late night parties...

GBGG Austin is loaded with events with names that are plays on SXSW. Well, let me assure you here and now that the free (except for parking) and family-friendly GayBiGayGay is far more than just a play on words. Tomorrow, Sunday, March 17, the last day of SXSW, from noon to midnight, at 3506 Rogge Ln., just off of Springdale, GBGG invites guests to follow the balloons, streamers, signs, and gays to enjoy a day of music, fun, food, and drinks. Bring a blanket, snacks, and cash for the food trailer, beer station, and must-have merchandise. With an Aron Taylor photo booth, set design by Aaron Flynn, and live art installations by Rachael Shannon and Jason Rosen, guests will enjoy the best of SXSW queer culture (see full lineup in today's Gay Place, p.26.) Be there or be Cher!

Social Media: Your stylish Austin SXSW round up