After a Fashion: Granted

My new favorite portrait of myself, the way I actually see myself in the mirror. (Photo by Linda Hughes/Digital Painting by Charlie Terrell)

For the first time in over 12 years, I gave my heart away, a flight of fancy that was as delirious and delightful as it was painful and devastating. Shortly before the Eleven Eleven show, Jaclyn "Jacki Oh" Havlak, my producer, business partner, best friend, and muse, introduced me to Grant Hicks, with whom, she felt, I might develop a romantic connection, who also had a beautiful voice to announce the celebrity names in my show. I met this geeky, mild-mannered guy with the lovely mellifluous voice. He told me he was a healer, performer, and teacher. After assessing my exhausted state, he asked to "work" on me for 45 minutes. Sounded good to me. When he brought me out of it, after a mystifying and intriguing 45 minutes of hypnotic words of understanding, he was holding my heart in his hands. I felt a renewal and a strange new elation, ready to tackle the overwhelming design issues that confronted me. In many ways, his hands remained on my heart long after he left that day.

The night of the show at the Driskill, seemingly out of nowhere appeared this devilishly handsome, stylishly-dressed guy who scooped up my scattered belongings and escorted me upstairs. Grateful for his patience, I asked who he was. "I'm Grant Hicks," he said, "your announcer." I was astounded. Clark Kent had become Superman. We weren't far away from each other for long after that. I spent plenty of time with him while he was starring in Land Without Evil, and we shared experiences that drew us closer and closer together. Even if Grant didn't quite understand some of the transformations he was going through, he was grateful to have an understanding, nonjudgmental companion with whom to collaborate and explore some of the disparate personas within ourselves. Our time together intensified.

As I began to design my men's collection for DIFFA, Grant was right there with me, and from the time I designed the first pair of pants and first jacket, using him as my fit model, he became the essence, the energy, and the muse behind the collection. As our Dallas deadline loomed closer, he became aware of his critical role and worked with me for incredibly long periods, soaked with more deeply personal exchanges. It was dizzily enchanting for both of us, and I knew I wanted him by my side always. I had, without wanting or realizing it, fallen head over heels in love with him. When we finally worked through the madness to actually get in the car with Jacki to drive to Dallas, I admitted to him that I was ridiculously in love with him, and he, in turn, and in gentle loving words, made it clear that though he loved me very much and also wanted to be with me, that it wasn't going to be anything romantic or sexual. He felt I was his teacher, his mentor, a fatherlike, sagelike being, and that it would be violating something ancient and sacred by crossing that line. The words stung as if I'd ingested poison. I felt wretchedly old, completely undesirable, and suicidally pathetic. I'd been in denial that he also had someone else in his life, and that she was providing for his romantic and sexual needs.

Suddenly, I felt deeply ashamed of myself – of the tantrums, the possessiveness, and mistrust. I was mortified that I'd put him into that position. The entire collection was like a painful birth, so intrinsically wrapped up in the delirium of loving Grant. Though my heart was a gaping wound, here we were – Jacki, Grant, and me – decked out in my best finery ready to make a dazzling appearance in Dallas. And that we did. Grant was the star of the show, working my clothes as if they'd been designed for him ... which in a certain reality, they were. And it was a heavenly collaboration between master and muse, just as it had been for Jacki and me. Jacki and I have the relationship that would be the perfect blueprint for my relationship with Grant: that of loving support, mutual respect, mutual exchange of creativity, and mutual respect for privacy. After all, the qualities of Grant's that I fell in love with are the same qualities he still has, and are the same qualities that I still want in my life. And with that, I make my peace. 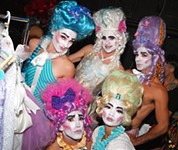 After a Fashion: Top These
Your Style Avatar gets on top of the Tops of 2012

After a Fashion: Wandering Lust
Finally! Details about Your Style Avatar's return to fashion