After a Fashion: The DIFFA Difference

Your Style Avatar gets an invitation he can't refuse 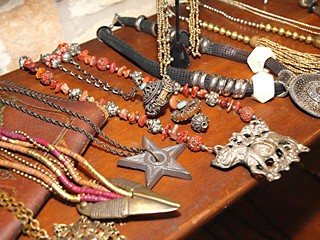 I remember when the Design Industries Foundation Fighting AIDS began in 1984. Of course in 1984, the design industries and other creative arenas were losing their stars (as well as the untold thousands of unsung victims) to the plague. In 1985, Rock Hudson died, an event that suddenly thrust the subject of AIDS into the living rooms of middle America. By that time, the various related fashion industries had already banded together as DIFFA and began to raise money to allocate to AIDS research as well as to those suffering. Today, with chapters in Seattle, Kansas City, Atlanta, Chicago, Boston, San Francisco, New York, and Dallas, DIFFA's events make a big difference in the continuing fight. Everything's big in Texas, and DIFFA Dallas is the most active chapter with glittering parties and A-list events, the centerpiece being a major fashion event, House of DIFFA: Collection 2013, with a silent auction of designer jackets, live auction, dinner, an amazing runway show, and an afterparty – spectacle and excitement in a way that only DIFFA can deliver. In the past, DIFFA Dallas has only reached out to L.A. and New York designers. But this year, Austin will be making a strong presence. My friend Greg Haynes Johnson, chair of the DIFFA board of trustees, was at my Eleven Eleven fashion show and recommended me. Seemingly moments later, I received the deeply flattering official invitation to participate. Representing Austin along with me are Ross Bennett and Linda Asaf. House of DIFFA: Collection 2013 takes place on Saturday, March 23, at the Hilton Anatole in Dallas. All info can be found at www.diffadallas.org/events.

The Summer of Swan

One of my first friends here in Austin, model, jewelry, and fashion designer Summer Lawson has long been selling her stylish, dramatic designs under the name of the Black Swan Theory at www.etsy.com/shop/TheBlackSwanTheory. I love Etsy for its ability to attract broader audiences, but, then again, having a strong local presence is an excellent foundation for expansion. Summer proudly announces that her ravishing, curated selection of one-of-a-kind jewelry designs is available at Laced With Romance Vintage (1601 S. First) and will soon be available on the website, www.lacedwithromance.com.

The 11th season of Project Runway has debuted and the show keeps chugging along – from network changes, staff changes, and format changes to the spin-off series, Project Runway All Stars. It tries to evolve and remain current just like the fashion industry. The new twist is that designers have to work with teams. This season, Austin is once again represented, this time by designer Daniel Esquivel, who won the first challenge on the opening episode. A promising start, indeed. Regardless of the outcome, Daniel will have plenty of stories to tell after working with Tim "I only play nice on TV" Gunn, the Teutonic Heidi Klum, and the panel of judges that includes the leathery Nina Garcia, the charming Zac Posen, and guest panelists that include Susan Sarandon, Bette Midler, Miranda Lambert, Kristin Davis, Christian Siriano, and others. Someday I'll tell the story of my audition for Season 3 of Project Runway in all its grueling detail. Another time. But for now, good luck, Daniel!

I've certainly raved about Morgan Sorne in this column in the past. I think he is perhaps the most dramatic and riveting performer that you've probably never heard of. Angry and stomping out the rhythm, or crooning and intimate, Morgan, who performs under the name of Sorne (pronounced sor-EN) is in production with a new album that has been composed over a number of years. Look up his past work at www.sorne.com, Facebook, and YouTube, to find links to his Kickstarter campaign page and help him complete his upcoming masterpiece.