After a Fashion: Target Shooting 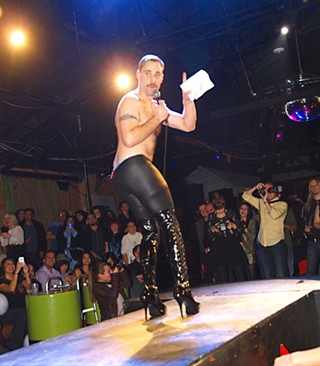 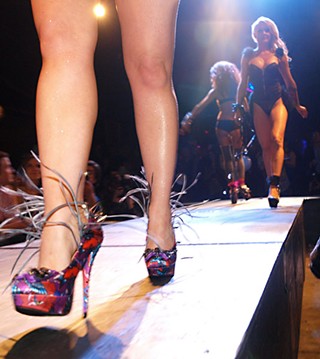 Something new from the Haus of Roosevelt

A few Thursdays ago turned out to be a last-minute throwdown of models, dresses, makeup, hair, and locations, so that I could turn in photos the next day for a statewide magazine. (The ripples from my November fashion show continue to emanate.) JohnPaul Wilson (see BAD JohnPaul Photography on Facebook) shot it, of course; I love letting him explore his more glamorous side, and I call him GOOD JohnPaul when he does that. I hijacked Jacki Oh's afternoon to help me pull it all together. She's such a champ, remembering to bring things that I'd obviously forgotten (like the dresses). We arrived late, but our makeup and hair artist, the faaabulous Kelsey James (find her on Facebook, or at www.kelseyjames.com), was already applying her magic to the magnificent Madison Paige. Kelsey and Maddie are no strangers; seems like every time Kelsey does Maddie's makeup, it winds up in Vogue Italia. The dreamy Lauren James was also slated to model, along with Jacki Oh and Eva Strangelove. Unfortunately, the night of the shoot, Eva wound up in the I.C.U. with pneumonia (get better soon, Eva!), so the three women modeled with Fets Benavides and Grant Hicks. Aside from getting the shots for the next day, another goal was to get Fets and Madison together. These two models from Wilhelmina Brown are the reigning monarchs of modeling in Austin, in my opinion. The Nordic-looking glamazon ice goddess Maddie, at six feet in bare feet, is the perfect complement to Fets' dark, brooding looks and his scandalously gorgeous frame. No one else in Austin captures the high-fashion look that has evolved over the last five or six years better than Maddie and Fets. Surely, both, with their innate beauty and charisma, will be snatched away from us by New York, L.A., or Milan. It was an incredible honor for them both to show up and indulge me. The resulting photos of the entire shoot were stunning and showed the clothes the way I'd intended, and that's exactly part of why JohnPaul and I love working together. We worked until we could barely hold our eyes open, yet upon waking the next morning, the three photos I needed were in my inbox ... capturing all the luxury, sexiness, and attitude that I wanted to see. Thanks to a great team!

GLAM ON THE LAM

The glamour continued on Friday night, with JohnPaul Wilson's launch at Haven of Roosevelt Cevallos' new company, Haus of Roosevelt (Roosevelt Couture on Facebook). To put it simply, Roosevelt embellishes shoes. But ultimately, he's a showman extraordinaire, taking his own visions of dazzling drama and high glam and applying them to shoes – women's, primarily, but not exclusively. He had a segment in both my Eleven Eleven show in November and our August preview, but this was his first solo show ... and he did not disappoint. The irascible CJ Morgan of KLBJ-FM (who modeled menswear for me in my November show, notably by pulling up his shirt and shaking his, uh, midsection at the audience – to my utter horror) emceed the event, appropriately called Pump Up the Glam, and was completely in his element surrounded by friends, fans, and other deviants. Suave, smooth, funny, and a real gentleman, CJ was the perfect opener for a show that included Le Studio performing a special cover of Kazaky (the band of men who perform in women's shoes) and the premiere of Roosevelt Couture's new ad directed by Alex Sanchez, entitled "L'envie de Chaussures." And the shoes and the models? Just go to Roosevelt's page and see for yourself, but you might need sunglasses.

No one had heard of Jellifi, but suddenly Facebook was alive with invites to Jellifi: A Beta Party. Apparently, an event-staffing company was showing off what they could do. I'd say it was indeed a beta party (and needed lots of debugging). Nice work though by CJ Morgan, Ross Bennett with his preview, Teddies for Bettys, and Texas 360 Catering.